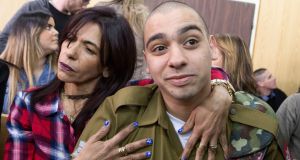 Israeli soldier Elor Azaria with his mother at the start of his sentencing hearing in Tel Aviv, Israel, in February. Photograph: Jim Hollander, Pool, via AP

Israeli police have launched an investigation into incitement against President Reuven Rivlin in the wake of his decision to deny the petition for a pardon by Elor Azaria, the soldier jailed for having shot and killed a wounded Palestinian assailant in Hebron in March 2016.

In a case that polarised Israelis, Azaria was sentenced to 18 months in prison for manslaughter over the shooting of the Palestinian who had stabbed other soldiers in the disputed West Bank city.

Shortly after Mr Rivlin made his announcement on Sunday, photos of him wearing a keffiyeh Arab headdress were posted on social media along with captions, such as “Reuven Rivlin the traitor, may he be damned”. Other images depicted the president in a Nazi uniform.

“In a democracy, you may criticise everyone. Not all criticism is incitement – but it should be without keffiyehs, without nooses, and without Nazi uniforms.”

Azaria began serving his term in a military prison in August and a month later the Israel Defence Forces chief of staff Lt Gen Gadi Eizenkot reduced his sentence by four months on compassionate grounds.

In October, Azaria petitioned for a presidential pardon, claiming justice had not been served.

Parallel to the social media campaign, the president also came in for criticism from right-wing politicians, including many from Mr Netanyahu’s ruling Likud party.

Culture minister Miri Regev accused Mr Rivlin of “undermining the institution of the presidential pardon and abandoning Elor”, who, she said, should not spend one more day in jail.

Another Likud Knesset member, Oren Hazan, demanded that Mr Rivlin resign as president, saying, “With this miserable decision, Rivlin turned himself into a president who represents only the left.”

The case of Azaria has bitterly divided Israel, with polls showing a majority of the public support clemency. At the age of 18 the vast majority of Israeli men enlist for a three-year compulsory military service and many serve in the occupied West Bank.

Members of the opposition noted that the images of the president wearing a keffiyeh were identical to pictures held in protests against former prime minister Yitzhak Rabin, before he was assassinated by an Israeli right-wing activist in November 1995.

Thousands of people have also signed an online petition calling for the government to abolish the institution of the presidency.