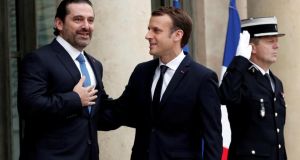 Saad al-Hariri, who announced his resignation as Lebanon’s prime minister while on a visit to Saudi Arabia, with French president Emmanuel Macron on the steps of the Élyseé Palace in Paris. Photograph: Benoit Tessier

The Lebanese prime minister Saad al-Hariri has announced his intention to return to Beirut on Wednesday November 22nd, to consult with president Michel Aoun and participate in independence day celebrations.

Yet the question of Mr Hariri’s future remains unanswered, amid continuing tension between Iran and Saudi Arabia.

Saudi Arabia and its Sunni Muslim Arab Gulf allies called an emergency summit of the Arab League in Cairo on Sunday to discuss means of confronting Iran and its Shia Muslim Lebanese allies in Hizbullah.

Mr Macron received Mr Hariri for a one-on-one meeting at the Élysée on Saturday, followed by a lunch with their wives and Hariri’s oldest son, Hussam. Many Lebanese had considered Mr Hariri a hostage of Saudi Arabia, since he resigned in a television broadcast from Riyadh on November 4th.

Speaking on the steps of the Élysée Palace, Mr Hariri thanked Mr Macron for his support and “unfailing friendship which I shall never forget”. He confirmed that he will return to Beirut on Wednesday, and promised to “make my position on all these subjects known after talking to president Michel Aoun”.

Later on Saturday, Mr Macron spoke on the telephone with Mr Aoun, president Donald Trump, the Egyptian president Abdel Fatah al-Sisi, the Saudi crown prince Mohamed bin Salman, and the UN secretary general Antonio Guterres. He talked to the Israeli prime minister Binyamin Netanyahu for half an hour on Sunday.

Despite French attempts to be a neutral mediator, Mr Macron appears closer to Lebanese and Saudi Sunni Muslims than to Iran and its Shia allies. In recent days, he and French foreign minister Jean-Yves Le Drian exchanged harsh words with their Iranian counterparts via the media. In Riyadh on Thursday, Mr Le Drian said France was worried about Iran’s “hegemonic tendencies”.

“Unfortunately, it seems that France has a partial and partisan attitude towards the crises in the region,” the Iranian foreign ministry responded the following day. “Such an approach, on purpose or not, helps to transform potential crises into real crises.”

On Friday night, Mr Macron expressed his “wish for Iran to adopt a less aggressive regional strategy, and that we clarify its ballistic policy”.

Mr Macron’s desire to extend the July 2015 nuclear accord with Iran to Iran’s regional activities and to the Islamic Republic’s ballistic missile programme has angered Tehran.

Shia Muslim Yemeni Houthi rebels fired a missile that was shot down over Riyadh airport on November 4th. Crown Prince Mohamed bin Salman denounced the firing as “direct military aggression” by Iran. Two Saudi air strikes had just killed 38 people, including eight children, in the Houthi stronghold of Saada, according to Le Monde.

On Saturday, Ali Akbar Velayati, an adviser to Ali Khamenei, the Supreme Leader of Iran, lashed out at Mr Macron. “On questions of defence and the ballistic programme, we ask no one’s permission,” Mr Velayati said. “How is that any of Mr Macron’s business? Who is he to intervene in these affairs?”

Advisers to Mr Macron stated repeatedly that Mr Macron’s objective is the stability of Lebanon, a strong Lebanese state with peaceful co-existence of its communities and functioning institutions, and the “dissociation” of Lebanon from regional crises.

“The message conveyed by the president [Macron] is the respect of this policy of dissociation or of neutrality of Lebanon in regional crises,” the Élysée said.

French attempts to make Lebanon “the Switzerland of the Middle East” appear quixotic. The power of Hizbullah – the militant Shia Islamist movement – has grown steadily since it was founded in reaction to the Israeli invasion of 1982. Earlier Lebanese leaders and Israel learned to their cost that it was too late to put the genie back in the bottle. Any attempt to disarm the Iranian-backed faction, which is allied with Syria and Iran, would doubtless mean armed conflict.

The present Lebanese government was formed only a year ago, when Hariri, backed by Saudi Arabia, and Mr Aoun, backed by Hizbullah and France, agreed to form a “joint ticket”. Relations between Mr Hariri and Mr Aoun are better than those between their mentors.

Saudi Arabia reportedly wanted to replace Hariri with his older brother, Baha, who is more hardline on Hizbullah. But the Hariri family vetoed the idea.

The basic questions remain unanswered. Will Mr Hariri continue as prime minister after Wednesday? Why did his two youngest children, Abdul Aziz and Loulwa, stay in Riyadh, where they are enrolled in school? Could the Saudi royal family use their presence to exert pressure on Mr Hariri? Are Hizbullah present in Yemen, Bahrain and Kuwait, as the Saudis claim?

Mr Hariri’s father, the self-made millionaire Rafiq Hariri, was assassinated in Beirut in 2005. When he resigned, perhaps under Saudi duress, the prime minister said his own life was in danger in Beirut.

Mr Hariri’s troubles may also be linked to Mohamed bin Salman’s anti-corruption drive. He has been a business ally of Prince Abdul Aziz bin Fahd, the son of the late king, and Bakr bin Laden. Both are under house arrest in the Ritz Carlton in Riyadh.

Mr Hariri’s construction company Oger owes close to €15 million to French employees. The Saudi ministry of labour paid nine months of their back salary last year, at the request of the crown prince, under French pressure. Mr Hariri promised Le Monde newspaper in August that he would resolve the issue, but he has not yet done so.

1 Two men found dead in Dublin city centre
2 Publican blames Covid-19 as Dublin’s Dice Bar to shut for good
3 Ireland could lose out as France lays claim to most of €5bn Brexit compensation fund
4 Miriam Lord: Dramatic Al sets the stage for a dark day of reckoning
5 Metro South may be back on table as transport plans for Dublin are reviewed
Real news has value SUBSCRIBE