Lebanese leader to clarify position on return from Paris 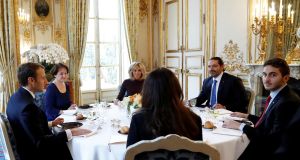 The Lebanese prime minister Saad Hariri left Riyadh on Saturday morning, lunched with president Emmanuel Macron in Paris, and announced his intention to return to Beirut on Wednesday.

Mr Hariri’s resignation on Saudi television on November 4th plunged Lebanon into political crisis. He said the activities of the Iranian-backed Shia Muslim Hizbullah endangered the region, and that his life was threatened if he returned to Beirut.

Mr Hariri, a Sunni Muslim, has said that Lebanon’s Maronite Catholic president Michel Aoun is “like a father” to him. Mr Aoun, who is allied with Hizbullah, accused Saudi Arabia of holding Mr Hariri hostage. He said the resignation was forced and that he would accept only a letter handed over to him in person.

Mr Aoun announced on Saturday morning that Mr Hariri had telephoned him from Riyadh to say that he would return on November 22nd to participate in annual independence day ceremonies. The Lebanese president then telephoned Mr Macron, who has become the principal mediator in the crisis. Mr Macron said he was receiving Mr Hariri in Paris “as prime minister because his resignation is not recognised in his country since he has not gone there”.

It is not known whether Mr Hariri will follow through with the resignation, or agree to stay in office, perhaps in response to a gesture from Hizbullah. Speaking on the steps of the Élysée Palace, Mr Hariri thanked Mr Macron for his support and “unfailing friendship which I shall never forget”. He confirmed he would return to Beirut on Wednesday, and said: “I will make my position on all these subjects known after talking to president Michel Aoun.”

Mr Hariri arrived from Riyadh in a private jet with his wife Lara al-Azm, who is Syrian. They and their eldest son Hussam, who is studying in London, had lunch with Mr and Mrs Macron, after a one-on-one meeting between the two leaders. The Hariris’ teenage children Abdul-Aziz and Loulwa remained in Riyadh, prompting speculation that they are in effect hostages, meant to ensure compliant behaviour by their father. The Saudi Crown Prince Mohammad bin Salman, reportedly believes that Mr Hariri has been too accommodating with Hizbullah. The Élysée refused to comment on the absence of the younger Hariri children.

Advisers to Mr Macron stressed that his objective was to ensure the stability of Lebanon as a strong and diverse state, and to “protect it from the negative influences of regional crises”.

By engineering Mr Hariri’s return via Paris, Mr Macron saved the crown prince, who is believed responsible for Mr Hariri’s resignation, the embarrassment of a direct return by Mr Hariri to Beirut. The Arab League is due to hold a meeting on Sunday in Cairo at Saudi Arabia’s urging where the Lebanon crisis and Iran’s role in the region are expected to be discussed.

Mr Macron’s handling of the Lebanese crisis has succeeded so far. He had less luck reconciling warring factions in Libya. His attempt to establish a contact group on Syria at the UN General Assembly also fell flat.

Saudi Arabia expressed anger at a remark by the German foreign minister Sigmar Gabriel by withdrawing its ambassador from Berlin on Saturday. Mr Gabriel had warned that “Lebanon risks falling into serious political and perhaps military confrontation” and called for the return of the prime minister. The Saudi foreign ministry spokesman said Mr Gabriel’s remarks were “dangerous, founded on erroneous information and do not serve stability in the region”.

The crisis has also strained relations between France and Iran. Speaking in Riyadh on Thursday, the French foreign minister Jean-Yves Le Drian said France was worried about Iran’s “hegemonic tendencies” in the Middle East.

“Unfortunately, it seems that France has a partial and partisan attitude towards the crises in the region. Such an approach, on purpose or not, helps to transform potential crises into real crises,” the Iranian foreign ministry said on Friday. Mr Macron responded to that statement Friday night, expressing his “wish for Iran to adopt a less aggressive regional strategy, and that we clarify its ballistic policy”.

On Saturday morning, Ali Akbar Velayati, an adviser to Ali Khamenei, the Supreme Leader of Iran, lashed out at Mr Macron. “On questions of defence and the ballistic programme, we ask no one’s permission,” Mr Velayati said. “How is that any of Mr Macron’s business? Who is he to intervene in these affairs?”