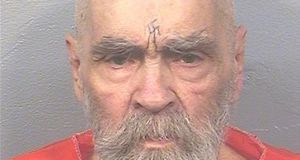 Charles Manson photographed in August 2017 was the leader of a cult known as the Manson Family. Photograph: California Department of Corrections/Reuters

Charles Manson, the murderer and cult leader, has died in a hospital in California. He was 83.

A statement from the California Department of Corrections and Rehabilitation said: “Inmate Charles Manson, 83, died of natural causes at 8.13 pm on Sunday, November 19th, 2017, at a Kern County hospital.”

Manson was convicted, along with four of his followers, of orchestrating the murders in 1969 of the pregnant actor Sharon Tate and six others in two attacks.

He was the leader of a cult known as the Manson Family, made up mostly of disaffected young women, some of whom became killers under his tutelage.

The five received the death penalty but were spared when capital punishment was temporarily abolished following a ruling by the supreme court in 1972.

Manson and his cult became notorious due to the brutality of the murder of Tate and the six other victims.

Tate, the wife of director Roman Polanski, who was out of the country the night of her murder, was eight months pregnant when Manson’s followers broke into her home in Los Angeles and stabbed and shot her and her visitors, Jay Sebring, Voytek Frykowski, Abigail Folger and Steven Parent. The word “Pig” was written in blood on the front door.

The next night, a group of followers murdered couple Leno and Rosemary LaBianca.

On Sunday night, Tate’s sister Debra Tate told NBC : “One could say I’ve forgiven them, which is quite different than forgetting what they are capable of.

“It is for this reason I fight so hard to make sure that each of these individuals stays in prison until the end of their natural days.”

Michele Hanisee, the president of the Association of Deputy District Attorneys for Los Angeles County, said: “Today, Manson’s victims are the ones who should be remembered and mourned on the occasion of his death.”

Manson and three female followers, Susan Atkins, Patricia Krenwinkel and Leslie Van Houten, were convicted of murder and conspiracy to murder and sentenced to death for killings at the two gruesome scenes in the summer of 1969. Another defendant, Charles “Tex” Watson, was convicted later.

Although the followers committed the murders, Manson had ordered them, and, at the LaBianca home, tied up the couple before leaving his followers to carry out the killings.

Prosecutors at the time said that Manson and his cult were trying to spark a race war that he believed was foretold in the Beatles song Helter Skelter, and hoped the Black Panthers would be blamed for the killings.

2014 interview with the Guardian. “No question he was legally innocent. And, more than that, he was actually innocent,” Mr Kanarek said, arguing that there was no evidence connecting him to the case.

But at a 2012 parole hearing, which was denied, Manson was quoted as having said to one of his prison psychologists: “I’m special. I’m not like the average inmate. I have spent my life in prison. I have put five people in the grave. I am a very dangerous man.”

According to the LA Times, Manson committed hundreds of rule violations while being held at the Corcoran state prison and was denied parole 12 times, with his next hearing set for 2027.

In June, officials denied a parole request by Krenwinkel, the state’s longest-serving female prisoner, after her attorney said she had been abused by Manson or another person. She has been denied parole multiple times in the past.

Manson spent most of his teens and 20s in and out of prison for various crimes, and he later became a singer-songwriter. He got a break in the music industry when he met Beach Boys drummer Dennis Wilson.

He grew his following in San Francisco’s hippie locale Haight Ashbury in the late 1960s before leading the Manson Family into violent crime. –Guardian