Conviction needed to prove presidents not beyond ‘oversight and the law’, says Schiff

The Republican-controlled US Senate has rejected Democratic efforts to request a subpoena seeking the testimony of former US national security adviser John Bolton in Donald Trump's impeachment trial. Video: Reuters 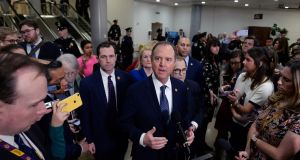 The second day of Donald Trump’s impeachment trial opened on Wednesday with the House impeachment managers setting out their opening arguments as to why the president should be removed from office.

Democrats from the House of Representatives have been given 24 hours over three days to give their statements, which means the process is likely to last until Friday night. Counsel for Donald Trump will then take centre stage on Saturday, presenting their opening statement in a process that is expected to stretch into Tuesday of next week.

House intelligence chairman Adam Schiff – increasingly the face of the Democratic case – began Wednesday’s session by thanking senators and the presiding chief justice for their patience. It’s a virtue they’re going to need in the coming days or weeks.

Tuesday’s sitting – the first full day of proceedings – evolved into an epic session, with debate stretching well into the night. For more than 13 hours, senators heard the case for and against the impeachment of Trump over his dealings with Ukraine, and more specifically the rules governing the impeachment trial.

Senate majority leader Mitch McConnell succeeded in getting his organising resolution setting out the structure of the trial through the chamber – but not without a fight from Democrats.

Minority leader Chuck Schumer tabled no fewer than 11 amendments, calling for the trial to subpoena witnesses like White House chief of staff Mick Mulvaney and former national security adviser John Bolton. The Republican wall stood firm and on only one amendment did a Republican – Susan Collins of Maine – break ranks and vote with Democrats.

Nonetheless, it forced many Republican senators into uncomfortable votes, despite them signalling they would not vote to call witnesses at this stage of the process.

McConnell appeared to be taken by surprise at the strategy employed by Democrats – a sign of the lack of communication between the two parties on planning this impeachment trial, in contrast to the Clinton impeachment, when all 100 senators voted to endorse the Senate rules.

He was also forced to back down himself on his original plans for the trial, allowing each side to spread their allocated 24 hours for opening statements over three days instead of two.

It remains to be seen if Schumer’s tactics work. By delaying the process, and tabling amendments, Democrats read into the record hours of damaging information about Trump’s activities in Ukraine. But the tactic of forcing senators to stay in their seats for more than 13 hours is unlikely to win him any fans among the Republican block that he is trying to persuade to back the Democrats’ vote on witnesses when it occurs later in the process.

As he took to the podium on Wednesday, Schiff was all smiles as he thanked the senators and the chief justice. His conciliatory comments may have been an effort to calm emotions after the fractious debate in the early hours.

He admonished both legal teams “in equal measure” about their behaviour, reminding them they were addressing “the world’s greatest deliberative body”. “I do think that those addressing the Senate should remember where they are,” he said.

The Senate trial follows Trump’s impeachment by the Democratic-controlled House of Representatives in December on two grounds: abuse of power and obstruction of Congress.

Democrats accuse the president of pressuring Ukraine to investigate his political rival Joe Biden, and his son Hunter, who served on the board of a Ukrainian gas company while his father was US vice-president.

They also argue that Trump withheld military aid from Ukraine as part of a quid pro quo in order to convince the Ukrainian president to publicly announce investigations.

Trump also weighed in from Davos. Despite the White House claim that the president’s main focus in the Swiss resort was on promoting America’s positive economic story as he met with senior political and business leaders, impeachment was evidently on Trump’s mind.

As the Senate’s opening day was entering its final stretch on Wednesday morning, Trump was waking up in Davos, issuing a series of pre-dawn tweets.

In media interviews and in a final press conference before leaving for Zurich airport to board Air Force One, he dismissed impeachment as a “hoax”, confirming that he had watched some of the proceedings while at the World Economic Forum.

He was very happy with his legal team, he said, while predicting the trial would prove corruption by some factions of the government towards him. “These are very bad people,” he said.

As senators settled in their seats for the second day of the trial, Schiff tried to set out clearly the issues at the heart of the matter, arguing that it was the role of Congress to keep presidents in check.

“If not remedied by his conviction in the Senate,” he said, Trump’s actions would invite “future presidents to operate as if they are also beyond the reach of accountability, congressional oversight and the law”.

Whether his arguments will be enough to change minds about the wisdom of impeaching Donald Trump remains to be seen.