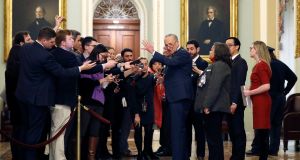 US senators clashed over the rules governing president Donald Trump’s impeachment trial on Tuesday, as the first full day of the trial got under way in Washington.

The Senate was poised late on Tuesday to endorse majority leader Mitch McConnell’s procedural resolution which aims to secure as swift as trial as possible, amid accusations by Democrats of a “cover-up”.

Mr McConnell is proposing a breakneck timetable over the coming days and weeks, with the aim of finishing the trial before Mr Trump’s state of the union address to Congress on February 4th. The possibility of a two-week trial contrasts with Bill Clinton’s impeachment trial in 1999, which lasted five weeks.

Outlining the resolution setting out his proposed procedures in the chamber, Mr McConnell said that the structure was “fair, even-handed and tracks closely past precedents”. But Senate minority leader Chuck Schumer denounced the process as “a rushed trial with little evidence, in the dark of night, literally the dark of night,” referring to the expectation that senators will sit well into the evening on each day of the trial. Claiming that the rules seemed to be designed “by president Trump for president Trump”, he said the trial was “nothing short of a national disgrace” and “one of the darkest moments in Senate history”.

In a sign of compromise on the part of Republicans, who control 53 seats in the 100-member chamber, Mr McConnell announced at the outset that the 24 hours allocated to each side for opening arguments would take place over three rather than two days, avoiding the prospect of 12 hours of proceedings each day. Under long-standing rules, the impeachment trial must begin at 1pm each day. It is widely believed that Mr McConnell’s decision to sanction a less-restrictive timetable followed requests by members of his own party, including senator Susan Collins of Maine.

Nonetheless, Mr McConnell was expected to secure enough votes to push through his organising resolution last night, despite efforts by Mr Schumer to amend it. Among the changes requested by the Schumer amendment was a provision to subpoena witnesses, but Mr McConnell said that this will be addressed at a later process in the trial.

In his opening statement, White House counsel Pat Cippolone said that there was “absolutely no case” against Mr Trump, arguing that “the president has done absolutely nothing wrong”. But Democratic commentators were quick to seize on some of his comments as misleading.

Mr Cippolone claimed that the Mueller report into Russian election interference had found “no obstruction” by the president, when in fact Mr Mueller, the special counsel, did not exonerate the president on this charge.

Adam Schiff, one of seven House impeachment managers selected to represent House Democrats in the trial, set out the prosecution case in his lengthy opening statement. Displaying messages and clips with direct quotes from the president, Mr Schiff said that Mr Trump clearly believes “he can do anything he wants, no matter how corrupt”. He argued that the president’s behaviour was “precisely the kind of conduct” America’s founding fathers had in mind when they included an impeachment provision in the constitution.

He also took issue with Mr Cippolone’s opening statement, noting that he had not even tried to defend Mr Mc Connell’s organising resolution which does not call for witnesses. There was “no defence of the McConnell resolution” because it was “indefensible”, he said. “No trial in America has ever been conducted like that.”

The Senate trial is due to last at least a week, though Mr Trump is ultimately expected to be acquitted given that a two-thirds majority is needed to convict him.