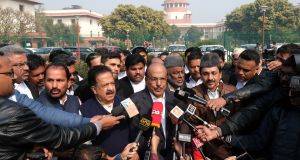 P.K. Kunhalikutty, a member of the Indian parliament, speaks to reporters outside the supreme court in New Delhi. The court has deferred a hearing on a controversial citizenship law. Photograph: T. Narayan/Bloomberg

India’s supreme court has refused to suspend the implementation of a controversial new citizenship law that has triggered countrywide protests in which at least 25 people have died.

Instead, the court gave prime minister Narendra Modi’s Hindu nationalist Bharatiya Janata Party (BJP) a month to respond to some 144 petitions challenging the constitutional validity of the Citizenship Amendment Act or CAA, which was enacted more than five weeks ago.

Opposition leaders expressed disappointment at the court’s ruling, saying it had not understood the “urgency” of the petitions against the CAA by giving the federal government four weeks to file its reply.

“The court should have been more sensitive to the matter,” said former Marxist MP Brinda Karat, adding that the protests against the CAA would continue unabated.

Approved by parliament in early December, the CAA offers Indian citizenship to six religious minorities including Hindus, Sikhs and Christians fleeing persecution from the neighbouring Islamic countries of Afghanistan, Bangladesh and Pakistan.

The multitude of petitions in the supreme court by opposition leaders, activists, student groups and ordinary citizens maintain that the Act is discriminatory, unconstitutional and against India’s secular traditions, as it bases the right to citizenship on religion and manifestly omits Muslims.

Thousands of demonstrators across India believe the CAA to be an attempt by Mr Modi and his BJP administration to impose a Hindu theocracy upon a syncretic India, where a multitude of faiths and religions have co-existed peacefully for centuries.

India has about 200 million Muslims, the world’s second highest after Indonesia, comprising about 18 per cent of the country’s overall population.

The federal government claims the CAA is not biased and has been passed to give sanctuary to minority communities fleeing persecution in the three adjacent Muslim states.

Mr Modi and federal home minister Amit Shah, who piloted the citizenship legislation in parliament, have refused to withdraw or dilute the Act, despite the widespread opposition to it.

Meanwhile, waving the Indian flag, singing non-denominational hymns and reciting extracts from the constitution, protesters continue to defy a colonial-era law banning the assembly of more than four persons.

Protesters have stood firm against tear gas shells, water canons and baton attacks by the police. One such demonstration, which began in mid-December and continues in the Muslim-majority Shaheen Bagh locality in Delhi, has become an exemplar of peaceful protest against the CAA.

Analysts and commentators have compared it to the non-violent resistance for freedom led by Mahatma Gandhi against the British colonialists in the early 19th century.

Separately, senior figures in Afghanistan and Bangladesh have said they do not understand the motive behind the CAA.

“We don’t understand why the Indian government did it,” Bangladesh prime minister Sheikh Hasina said in an interview to Gulf News over the weekend.

She said the move was not necessary, but that the Act was an “internal matter” for India.