July call with Trump sparked US investigation and embarrassed Zelenskiy 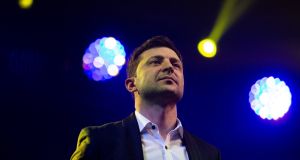 Volodymyr Zelenskiy: The furore taught him to treat some of Ukraine’s friends, as well as its foes, with great caution. Photograph: Taylor Weidman/Bloomberg

When Ukraine’s most popular comedian became its president last May, he was prepared for unpleasant surprises from the east, not the west.

Volodymyr Zelenskiy expected Russia to test him as it entered the sixth year of an undeclared war with Ukraine, but instead it was a conversation with a crucial ally that pitched the novice politician into a diplomatic “minefield”.

A US whistleblower’s complaint about his July 25th phone call with Donald Trump triggered a string of revelations that have led to the US president facing an impeachment trial that begins in earnest on Tuesday.

Democrats accuse Trump of abusing his power by withholding military aid from Kiev to pressure it to investigate his political rival Joe Biden and his son Hunter, who served on the board of a Ukrainian gas firm when his father was US vice-president.

The case has exposed efforts by Rudy Giuliani, Trump’s personal lawyer, to use US officials and diplomats, a motley crew of his own associates, and deeply discredited figures in Ukraine to dig up dirt on the Bidens and push a conspiracy theory that Kiev – not Moscow – meddled in the 2016 US election.

Trump denies the allegations and insists – regardless of that temporary halt to aid – that US support for Ukraine has only grown during his presidency.

For Zelenskiy, buoyed by his landslide election victory and eager for a White House invitation and a chance to charm Trump, the furore came as a sobering and at times embarrassing introduction to politics, and taught him to treat some of Ukraine’s friends, as well as its foes, with great caution.

“For Ukraine it’s very important to retain bilateral US support, but it’s very hard at the moment amid an intensifying pre-election battle in the United States and the impeachment proceedings,” said Ukrainian political analyst Volodymyr Fesenko.

“This is why Zelenskiy is trying to remain neutral and is not making any political statements around the impeachment case. Cautious neutrality is his main tactic now. The whole US story is a minefield for him, so he needs to move very slowly and carefully so as not to step anywhere dangerous.”

The White House’s rough transcript of the July call contained many cringeworthy moments for Zelenskiy, as he lavished Trump with praise and gushingly agreed that the US leader was “not only 100 per cent, but actually 1,000 per cent” correct that Germany and France were not doing enough for Ukraine.

The unguarded comments placed Zelenskiy in an awkward position with two major allies that are trying to broker peace between Russia and Ukraine.

“The transcript caused problems for Zelenskiy’s image and for relations with Germany and France. But as far as I know they have been managed and they are not acute now,” Fesenko told The Irish Times.

“The way Zelenskiy expressed himself was a mistake, of course, but then he never expected the transcript to be released. I’m sure he has regretted what he said many times, but it was a lesson for him and now he is much more cautious.”

While Zelenskiy’s popularity rating at home has slipped from highs of more than 70 per cent last September, experts blame widespread concern over land reform and peace talks with Russia rather than his dealings with Trump.

He was elected not for his political or diplomatic skills but for his perceived honesty and energy, and for his distance from a ruling elite embodied by his predecessor Petro Poroshenko – whose close ties to dubious figures now clustered around Giuliani remind Ukrainians of why they voted for radical change.

“Ordinary Ukrainians show only minimal interest in this [impeachment] story . . . It seems very distant to most people here,” says Fesenko.

“Nevertheless, it’s very important for Ukraine to keep receiving US financial and military-technical support. But Trump is very unpredictable. What if he suddenly gets offended by something else connected with Ukraine? We don’t know how he will react. I see the main risks for Ukraine coming from the impulsiveness of Trump.”

1 Drug dealer loses codes for €53.6m bitcoin accounts
2 ‘IRA has gone away’: McDonald responds to Garda Commissioner’s comments
3 More than 25 people to sue over circulation of images taken at Dublin Garda station
4 US attorney general to challenge retrial of convicted killers of Jason Corbett
5 Woman found living in squalor with flies coming from blanket she was using
Real news has value SUBSCRIBE