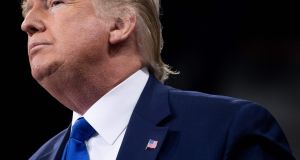 US president Donald Trump has the right to give evidence but this is unlikely. Photograph: Getty

US president Donald Trump’s impeachment trial begins on Tuesday in the Senate. Here’s what to watch for in the coming days and weeks.

Will witnesses be called?

Democrats have argued that senior figures with knowledge of the Ukraine controversy such as acting White House chief of staff Mick Mulvaney and former national security adviser John Bolton should testify. Republicans are opposed. A simple majority is needed to endorse the rules of the trial – including a decision on witnesses. With Republicans holding only 53 of the Senate’s 100 seats, will any senators cross the aisle and side with Democrats?

How will Trump’s legal team approach the trial?

Trump himself has the right to give evidence, but it is more likely White House counsel Pat Cipollone and his personal lawyer Jay Sekulow will represent him. But with the team also including high-profile names like Ken Starr, independent counsel during the Clinton impeachment, and well-known lawyer Alan Dershowitz, there is also the potential for some made-for-TV moments.

Will further details emerge about Trump’s dealings with Ukraine?

New information last week from Lev Parnas, an associate of Trump’s lawyer Rudy Giuliani, is potentially highly damaging to the president. It suggests that there was a surveillance campaign against top US diplomat Marie Yovanovitch before she was recalled from Kiev. Any information that proves Trump was aware of this campaign could unsettle some Republicans.

The Senate’s 100 members are permitted to ask questions in writing during the trial. These questions will give an insight into which Republicans could break with

Senate majority leader Mitch McConnell and vote against him on procedure. Republicans to watch include Utah’s Mitt Romney, Susan Collins of Maine, Alaska’s Lisa Murkowsi and Lamar Alexander from Texas, who is in his final term.

Any indication on timing

McConnell wants as swift a trial as possible. Both sides will be given 24 hours to set out their stall, with suggestions from Republicans that these sessions could be squeezed into two 12-hour days.

A vote to include witnesses – which could take place at the beginning or more likely at the end of the first stage of the trial – would significantly lengthen the trial. Bill Clinton’s impeachment trial lasted five weeks and the Senate heard from three witnesses who gave depositions but did not appear in the Senate.