Senators bite their tongues as impeachment trial gets serious 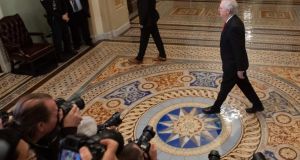 The US Senate has introduced even stricter rules for journalists during the impeachment trial. Photograph: Saul Loeb/AFP via Getty

There were bright blue skies over the US Capitol on another historic day in Washington on Tuesday as the impeachment trial of Donald Trump began in earnest.

Outside the Senate building a lone protester braved the cold holding a sign stating that the president’s “lies tear us apart!”

Inside it was business as usual, as groups of tourists and school children wandered around the majestic corridors of the neoclassical building learning about the nation’s history, apparently indifferent to the impending drama in the main chamber.

The US Senate has long regarded itself as the more austere of the two legislative bodies in Congress. Unlike the 435 members of the House of Representatives who face re-election every two years, each senator has a six-year term, underpinning the notion that the Senate is a more deliberate, considered body that operates at a higher plane than the feverish antics of the House.

Twenty-one years ago during the Clinton impeachment there was much debate over the possibility of Monica Lewinsky testifying, with virtually all senators committed to keeping a discussion of the president’s sex life off the Senate floor.

Rules and decorum have again come into play in this impeachment trial.

The Senate, which has always prohibited reporters from bringing electronic devices into the chamber, has introduced even stricter rules for the impeachment trial, including a ban on so-called “walk and talk” interviews with senators in corridors around the main chamber.

Senators must give their full attention to the impeachment trial for the coming days and weeks, refraining from speaking 'on pain of imprisonment'

On Tuesday, dozens of journalists gathered in the press gallery – a historic room adjacent to the Senate chamber – in a bid to secure a ticket for the event. After passing through a newly-installed metal detector, reporters were required to surrender phones and laptops as we took seats in the gallery just above the chief justice and the impeachment managers in the trial.

Following the recitation of a prayer and the pledge of allegiance, the senators began to file into the chamber. Among them were the four Democrats who are running for president, but who now must stay in Washington for the Senate trial instead of campaigning ahead of the February 3rd Iowa caucus.

One of the first in the door was Bernie Sanders. Perhaps smarting from comments earlier in the day from Hillary Clinton in an interview that “nobody likes him” in the Senate, Sanders sauntered up to some colleagues, hands on hips, making small talk as he waited for the trial to commence.

Also present were familiar faces from the last presidential primary race such as Republican senators Marco Rubio and Ted Cruz, who have transformed from never-Trumpers to staunch defenders of the president.

As the sergeant of arms reminded the 100 senators as proceedings began, the members must give their full attention to the impeachment trial for the coming days and weeks, forfeiting all electronic equipment, and refraining from speaking “on pain of imprisonment”.

For politicians used to the limelight it will be a tall order as they consider whether to remove the 45th president of the United States from office.