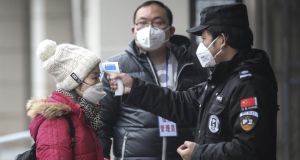 Security personnel check the temperature of passengers in the wharf at the Yangtze River in Wuhan, China on Wednesday. Photograph: Getty Images

All flights out of a city in China hit with coronavirus have been cancelled as the World Health Organisation (WHO) delayed its decision on whether to declare an international public health emergency.

More than 440 cases of coronavirus have been confirmed in Hubei province, of which Wuhan is the capital, and officials have said at least 17 people have died there.

Chinese state media said the city of Wuhan is shutting down outbound flights after the UK government announced all direct flights from the city into Heathrow would be subjected to enhanced monitoring while the British foreign office advised against all but essential travel to the city.

World Health Organisation director-general Tedros Adhanom Ghebreysus said they needed more information before deciding what to do, describing it as an “evolving and complex situation”.

Following a meeting on Wednesday, he said: “There was an excellent discussion during the committee today, but it was also clear that, to proceed, we need more information.

“For that reason, I have decided to ask the emergency committee to meet again tomorrow to continue their discussion and the chair, Dr Houssin, has agreed with that request.

“The decision about whether or not to declare a public health emergency of international concern is one I take extremely seriously, and one I am only prepared to make with appropriate consideration of all the evidence.”

He said there is a team in China working with local experts and officials to investigate the outbreak, and he added: “We will have much more to say tomorrow.”

The Associated Press reported the state-owned People’s Daily newspaper said in a tweet no-one would be allowed to leave Wuhan starting at 10am and that train stations and the airport will shut down.

The newspaper is also reported to have said that Wuhan authorities are saying city buses, subways, ferries and long-distance shuttle buses would also be temporarily closed.

The virus has spread from the central city of Wuhan, in Hubei, to Beijing, Shanghai, Macau, Hong Kong, and beyond to the United States, Thailand, South Korea, Japan and Taiwan.

The Chinese government has provided updates on the number of cases in an effort to head off panic, as hundreds of millions of people prepare to travel at home and abroad for Lunar New Year celebrations starting this week.

“The rise in the mobility of the public has objectively increased the risk of the epidemic spreading and the difficulty of prevention and control,” National Health Commission vice-minister Li Bin told reporters.

There was evidence that the virus was being spread through “respiratory transmission”, Ms Li said. And, the director-general of China’s Centre for Disease Control and Prevention, Gao Fu, said virus was adapting and mutating, underscoring the challenges for health authorities.

Health authorities are still trying to determine the origin of the virus, which officials say came from a market in Wuhan where wildlife was traded illegally. SARS was believed to have crossed to humans from civet cats sold for food in China.

The WHO says an animal source appears most likely to be the primary source of this outbreak.

Irish authorities said the risk from importation of the virus into the European Union “is deemed to be low at this time”.

However, the HSE’s Health Protection Surveillance Centre (HPSC) said “there is much more to learn” about how the virus spreads and the severity of illnesses it causes.

“Access to the full genetic sequence of [this coronavirus] will help identify infections with this virus going forward,” according to the HPSC. “More cases may be identified in the coming days, including more in countries outside China. Given what has occurred previously with MERS and SARS, it’s possible that some limited person-to-person spread will occur.”

Ireland recorded just one case of SARS during the 2003 international outbreak, in a patient who had returned from south-east Asia. The new virus identified in Wuhan is closely related to SARS.

The WHO has issued the public health emergency of international concern declaration on four previous occasions.

Swine flu:
The first declaration was in April 2009, with H1N1, or swine flu, spreading around the world and killing more than 200,000 people. Britain recorded 214 deaths, while 20 people died from swine flu in Ireland.

Initially travellers returning from Mexico, where the virus originated, were met by authorities at the airport and hygiene measures were recommended by the Health Protection Agency.

Polio:
Increased wild polio numbers in Pakistan, Afghanistan and Nigeria led to an emergency being declared in May 2014, a remarkable step given that the disease was thought to have been almost eradicated.

There have been no domestic cases of polio in the UK since 1982.

Ebola:
The deadly disease broke out in Guinea, Liberia and Sierra Leone, with an emergency declared from August 2014 to March 2016. Almost 30,000 people were infected and more than 11,000 died.

The UK made a significant contribution after the outbreak by working with the Wellcome Trust on an experimental vaccine which the European Medicines Agency approved to treat Ebola in November last year. A vaccination programme is under way in the Democratic Republic of Congo’s (DRC) North Kivu province.

A second emergency was declared, after months of hesitation, last July after it was confirmed that Ebola had spread to Goma, the capital of North Kivu, where DRC’s international airport is located. The government said at the time that the Britain was “providing expertise and support” to help the WHO “in a very insecure region”.

Zika:
The life-threatening virus was first identified in a monkey in Uganda in 1975. Its spread by mosquitoes in the Americas led the WHO to declare it an emergency from February to November 2016.

The first emergency from a mosquito-borne disease is thought to have been responsible for 2,000 possible cases of birth defects and 29 infant deaths in Brazil. – Additional reporting agencies