From presidential candidates to Booker Prize novels, experts cannot make up their minds 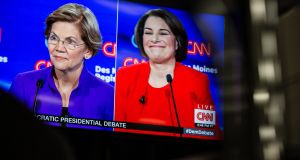 E pluribus unum – out of many, one – reads the motto of the US, and as with the motto so with the political system: from many candidates comes one president. But this time around, the editorial board of the NYT has either forgotten this basic fact or decided to jettison it as a meaningless relic. In 2020, the NYT has endorsed two candidates. Two women, it was keen to stress.

“American voters must choose between three sharply divergent visions of the future” the editorial claims: one is to stick with Trump, another is to play safe with a moderate, and another to take a risk with a radical.

In the radical camp are Bernie Sanders and Elizabeth Warren. But, put off by Sanders’s so-called aversion to compromise, aided by concerns over his age and health, the NYT has anointed Warren as the standard-bearer of the American left.

On the other hand, a powerful centrist voice could not only restore American institutions but set them on a new and fundamentally realistic path. If that’s right, then Amy Klobuchar is the ticket to success, so claims the NYT.

How about Warren! Klobuchar? Sure, why not!

As the editorial rightly predicted – “There will be those dissatisfied that this page is not throwing its weight behind a single candidate” – the decision has raised some eyebrows: exactly what is the benefit of endorsing two candidates when, famously, only one can win? If the NYT editorial board cannot make up its mind after hours of interviews with the candidates (a luxury unavailable to most) and private deliberations, how on earth is anyone else supposed to?

The NYT has stylishly diagnosed the quagmire the Democrats face. There are two options: recognise the US is so far changed that an entire overhaul of the system is in order; or understand that the radical vision may not be grounded in the political reality required to beat President Trump. An elegant diagnosis, not many would disagree.

The point of the endorsement, and the editorial pages in the first place, is to take a view, pick a side

But withholding an answer – whether it was right or not – is the equivalent of telling you your apartment has damp, without offering a solution.

The problem runs deeper than an uncharacteristically spineless decision from the editorial board, however. Last year the coveted Turner Prize was shared between all four nominees, and the Booker Prize was split between Margaret Atwood and Bernardine Evaristo. It seems judging panels are rapidly and unprecedentedly losing confidence in their convictions, and failing to make the hard choices that their jobs require.

The Booker panel – consisting of memoirists, publishers and editors, experienced in their fields and in tune with the industry’s commercial trends – felt unable to make what is ultimately a low-stakes decision: whether Evaristo’s Girl, Woman, Other or Atwood’s The Testaments is a better book.

It is no surprise, then, that a prestigious newspaper’s editorial board in this climate could not find the confidence required to work out the best way for the Democratic Party to combat the phenomenon of Donald Trump.

As senior Tory Michael Gove claims that “people in this country have had enough of experts,” and Trump takes any opportunity to leverage accusations of “fake news” at fair-minded media organisations, it is obvious the value of expertise is being called into question from the very top. The basis of trust that people have long put in experts is being eroded – and now those who take the time to gain experience and work out the answers to difficult questions are losing their capital.

When we remember that accepted facts are indiscriminately contested by the White House, and across the UK institutions are casually dismissed as partisan, this growing phenomenon becomes much easier to explain.

An NYT endorsement will not change the mind of every voter – it may even push some in the opposite direction, and its real-life impact is difficult to assess. Nor do people entirely rely on the NYT to tell them how to vote, or how to organise their lives, what their values should be and who would be the best person to defend their interests from the White House.

But the point of the endorsement, and the editorial pages in the first place, is to take a view, pick a side. Rather than a minor gripe with a dual endorsement, there is something altogether more worrying emerging – why can’t the experts trust themselves at the very moment it is most required of them?

1 DUP pleads with UK to reduce salary threshold for migrant workers coming to North
2 A Russian cruiser with ‘cannibal rats’: What other ‘ghost ships’ could be out there?
3 Expert tips: A dentist on how to have perfect teeth
4 ‘If all the immigrants go back, who will work in the meat factories and do the crap jobs?’
5 Gardaí investigating four-lane motorway sulky race
Real news has value SUBSCRIBE