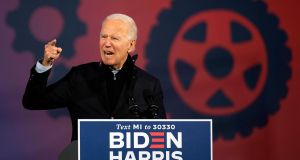 Congressman Richard Neal, the chair of the Ways and Means Committee in the US Congress, has reiterated his warning that there will be no trade agreement between the US and the UK if the Good Friday Agreement is undermined.

Speaking at a virtual “Irish Americans for Biden” event last night, Mr Neal said that he had made the point to the British foreign secretary, the British ambassador to the US and the previous prime minister that he viewed any threat to the successful elimination of the border on the island of Ireland “as a threat to any opportunity to embrace a bilateral trade agreement with the UK.”

“We have passed that on, we have met with the most earnest Brexiteers and have made it clear to them that we stand by the work America did and recall that it was the American dimension that helped catapult the Good Friday agreement into the limelight for other longtime disagreements across the globe.”

“Sometimes it’s hard to get through to the UK, no matter what we say,” he said, noting that Boris Johnson had had a difficult day in London in the House of Lords over Brexit.

Speaking about the forthcoming presidential election on November 3rd, Ms Gillibrand said that the “core pillars of our democracy, from voting to the Supreme Court, are under threat. We know Joe is the person for the job.”

“As an Irish American, I see our shared values in Joe Biden,” she said, highlighting the former vice president’s upbringing in an Irish-American household. Noting his family’s decision to leave Ireland in the nineteenth century, Ms Gillibrand said that Joe Biden “inherited that same spirit, that same outlook” noting his commitment “not to leave anyone behind”.

“Joe knows that ours is a nation of immigrants,” she said, stressing that a Biden administration would “stop the Trump administration’s unrelenting assault on immigrants”.

Pennsylvania congressman Conor Lamb, an early supporter of Joe Biden’s candidacy who won a Republican-leaning seat in the 2018 midterm elections, spoke about the house that still stands near his home near Pittsburgh, where his great-grandparents lived after emigrating from Co Galway.

Describing how Joe Biden had taken a recent train journey through western Pennsylvania, he said that “in this part of western Pennsylvania there are a lot of areas that used to vote very reliably Democrat every four years, and they were counted on… there were a lot of union members, the Irish Americans of many generations who worked in the mines and worked in the steel mills and the railroads.”

He said that Mr Biden was committed to the idea of “making it in America” and creating new jobs for the people of those regions. “That’s something that a lot of Irish families got their start doing,” he said.

Stella O’Leary of the Irish American Democrats highlighted the role the International Fund for Ireland (IFI) has played in helping to sustain and foster peace in Northern Ireland, noting that “unfortunately the hatreds and divisions in Northern Ireland did not disappear” with the Good Friday Agreement.

Tuesday night’s event was the latest effort by the Biden campaign to reach out to Irish-Americans and the Irish community ahead of November’s election.

A memo on Ireland and Irish-America published by his campaign over the weekend states that Mr Biden if elected will “support active US engagement to advance the Northern Ireland peace process” and will ensure that there is “no US-UK trade deal if the implementation of Brexit imperils the Good Friday Agreement”.

It follows a statement issued by Mr Biden last month warning that a trade deal between Washington and London – a key priority of Brexit advocates in the run-up to the 2016 referendum on leaving the EU – would not happen if the Good Friday Agreement is undermined.

“We can’t allow the Good Friday Agreement that brought peace to Northern Ireland to become a casualty of Brexit. Any trade deal between the US and UK must be contingent upon respect for the Agreement and preventing the return of a hard border. Period,” he said at the time. It followed a strong warning by House Speaker Nancy Pelosi and Ways and Means chairman Richard Neal warning that Congress will not endorse a trade deal if peace in Northern Ireland is jeopardised.

The presidential candidate also vowed to prioritise legislation to create a roadmap to citizenship for the 11 million undocumented people living in the United States “who have been strengthening our country for years,” including thousands of Irish-born citizens. “Joe Biden rejects Donald Trump’s immigration policies and will restore America’s values as a nation of immigrants,” the statement says.

Mr Biden, whose ancestors emigrated to the United States in the mid-19th century from counties Mayo and Louth, frequently draws attention to his Irish heritage, and his experience of growing up in a Catholic Irish-American community in Scranton, Pennsylvania.