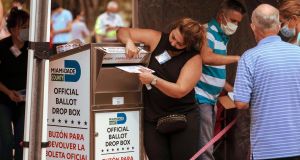 A poll worker deposits a mail-in ballot at an official dropbox at a polling place in Miami, Florida. Photograph: Saul Martinez

Democrats are mounting a strong challenge to President Donald Trump in the southern state of Georgia, according to a new poll that shows presidential candidate Joe Biden neck-and-neck with Mr Trump in the Republican-leaning state.

With less than two weeks to go to election day, a New York Times-Siena College poll puts both candidates at 45 per cent among likely voters in the state, with Democrats gaining ground in the vote-heavy suburbs of Atlanta.

The state has not voted for a Democratic president since 1992, when Bill Clinton won there, with Mr Trump coming out more than 5 percentage points ahead of Hillary Clinton in 2016. But Democrats are hoping that a swing against Mr Trump among centrist Republican voters, particularly suburban women, as well as higher turnout among African-American voters, could turn the state blue.

Mr Trump campaigned in Macon, Georgia, last Friday – a worrying sign for some in the Republican party that the incumbent is on the defensive in the state. The Trump campaign has also been advertising heavily there.

Two Senate races are also taking place in Georgia, with the New York Times-Siena College poll showing that Democratic candidate Jon Ossoff has closed the gap with sitting Republican senator David Purdue, with both candidates now at 43 per cent. Mr Purdue was widely criticised for mispronouncing the name of Democratic vice-presidential candidate Kamala Harris at Mr Trump’s rally in Macon last Friday, despite serving with her in the Senate.

Georgia has set records in terms of early voting turnout. As of Monday night, 1.7 million votes had already been cast, according to secretary of state Brad Raffensberger, compared with 700,000 ballots at the same point in 2016.

There were some positive signs for Republicans in Florida, however,where figures suggest that almost an equal number of registered Republicans voted on the first day of early voting as Democrats, bucking the trend that usually sees a greater participation by Democrats in early voting.

As Mr Trump prepared to fly to Pennsylvania for a campaign rally on Tuesday night, he reiterated his criticism of infectious disease expert Dr Anthony Fauci in a phone-in interview with breakfast TV show Fox and Friends. Although he said he got along with Dr Fauci “very well”, he said the immunologist was “sometimes not a team player” and was a “Democrat” and friend of the Cuomos, a reference to New York governor Andrew Cuomo and his brother Chris, a CNN presenter.

Mr Trump said that November’s election was “the most important election in the history of our country . . . We will never allow this country to become a socialist nation, and that is what they’re trying to do.” He claimed that Democrats “will raise your taxes, they’ll take away your guns”.

Meanwhile, Mr Biden spent his day preparing for Thursday night’s debate with the president, his campaign said. The former vice-president picked-up endorsements from two influential players on Tuesday – Michael Steele, the former chairman of the Republican National Committee; and William McRaven, the retired navy admiral who oversaw the raid on Osama bin Laden’s compound in 2011.

Former president Barack Obama is due to hold a campaign event for his former vice-president on Wednesday night in Philadelphia.

As the election campaign entered its final stretch, on Capitol Hill negotiations intensified on a coronavirus stimulus package. House speaker Nancy Pelosi spoke several times with treasury secretary Steve Mnuchin, who is in Israel on an official trip.

Senate majority leader Mitch McConnell, who has differed with the White House on the scope of a new stimulus package, said he would put a package to a vote on the Senate floor if a deal was reached between Ms Pelosi and the Trump administration.

Though the president has delivered mixed messages on his desire for a coronavirus relief Bill, he said on Fox on Tuesday that he was confident Senate Republicans would back him, despite the White House favouring a bigger spending package than many Republicans in the Senate.