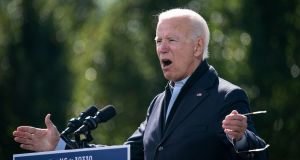 Democratic presidential candidate Joe Biden urged Americans to cast their vote early in the presidential election as he campaigned in the key swing state of North Carolina on Sunday.

“You can vote early in person until the 31st – but don’t wait, go vote today,” Mr Biden said at a drive-in rally in Durham.

Republican president Donald Trump won North Carolina in the 2016 presidential election, but Democrats eye an opportunity to flip the state in the November 3rd ballot. Mr Trump won North Carolina by 3.6 percentage points in 2016, but Democrat Barack Obama won there narrowly in 2008 before losing the state to Republican candidate Mitt Romney in 2012.

Mr Biden urged constituents to vote, not just in the presidential election, but for Democratic candidates down the ballot, including in North Carolina’s Senate race where Democrat Cal Cunningham is challenging the incumbent Republican senator, Thom Tillis, for the seat.

“Don’t just vote for me and Senator [Kamala] Harris – you’ve got a governor’s race, a Senate race, a record number of black women on the ballot. Congress and lieutenant governor, labour commissioner and the courts,” Mr Biden said.

Notably, however, Mr Cunningham, who was recently embroiled in a scandal after he was revealed to have sent explicit text messages to a woman who was not his wife, did not appear at the event.

The former vice-president also took aim at election rival Mr Trump. “We need leadership that de-escalates tensions, opens lines of communication and brings us together to heal and to hope,” he said.

Mr Biden was speaking in Durham, part of the so-called “research triangle” region of the state with a vibrant university population and strong Democratic support. But Mr Trump remains popular in the rural part of the state. Earlier in the day, Mr Biden attended Mass in his home state of Delaware.

Mr Biden’s appearance in North Carolina comes as his campaign warned against complacency, despite polls showing the Democratic candidate with a consistent lead over Mr Trump. In a message on Saturday, Mr Biden’s campaign manager Jennifer O’Malley Dillon warned supporters that victory on November 3rd was not guaranteed, highlighting a close race in North Carolina in particular. “This race is going to be incredibly close in the battleground states,” she said. “We’re not taking a single vote for granted.”

Though Mr Biden is ahead by nine points nationally on average according to the Real Clear Politics poll of polls, his lead is tighter in key swing states. A CBS poll on Sunday showed Mr Biden ahead of his Republican rival in Wisconsin with a five-point lead, though his margin is tighter in Arizona, where 50 per cent of likely voters in the traditionally-Republican state say they are voting for the Democratic candidate, compared with 47 per cent for Mr Trump. The president is due to hold a campaign event there on Monday.

Meanwhile, Mr Biden’s running mate, Kamala Harris, will return to the campaign trail on Monday in Florida, after she cancelled in-person events after an aide tested positive for coronavirus.

Ms Harris will hold campaign events in Orlando and Jacksonville, while her husband will visit Miami-Dade, Broward and Palm Beach counties in the greater Miami area in the south of the state.

Mr Biden is ahead of Mr Trump in fundraising terms, raising $383 million in September, compared with the $248 million raised by the president together with the Republican National Committee last month. Both campaigns are investing heavily in TV and online ads in battleground states like Florida, Michigan and Arizona as the campaign enters its final two weeks. The Biden campaign on Sunday announced it was running a series of ads that will play during National Football League (NFL) games. The 30-second slots began on Sunday.