Bernie Sanders will never be US president, but his ideas have won the day

US Politics: Coronavirus crisis has been the making of Democratic contender’s worldview 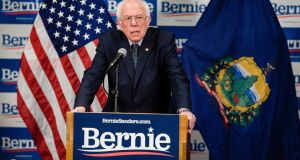 US senator Bernie Sanders: ‘If it is his fate to watch the US embrace bigger government, but under the leadership of others, there are worse niches in history.’ Photograph: Jacob Hannah/New York Times

Eight years have passed since Mitt Romney expressed his disappointment with almost half of all Americans. Forty seven per cent are “dependent upon government” – claimed the Republican Party’s then presidential nominee, in leaked remarks – and “believe that they are victims”.

Among the frills to which they regard themselves “entitled” are medical care, accommodation and food. “You name it,” he said, as though he had just itemised the contents of a prima donna’s rider.

On Monday, Romney urged the government to pay $1,000 to each and every American adult. Besides this helicopter money, the senator wants to help the virus-stricken economy with more paid leave, unemployment insurance and nutritional programmes. The stern budget hawk of yesteryear, for whom the US was a wheezing slacker, ripe for a private-equity turnround, could hardly be more munificent.

It is my profession’s crass duty to spot the winners and losers of coronavirus. In the first category, I suggest another septuagenarian senator of New England pedigree. Bernie Sanders will not – and therefore, at 78, will never – be the Democratic nominee for US president.

After clinching primaries in Florida and elsewhere on Tuesday, Joe Biden is now less his competitor in that race than a receding speck on the horizon. There is comfort for Sanders, however, in the intellectual co-option of such improbable people as Romney.

In a way that was not true even two weeks ago, US politics now takes place on unambiguously social-democratic terms. A leftward trend that was already in glacial progress (look at public opinion on healthcare, on wealth taxes) has accelerated in an atmosphere of emergency. The crisis has been the making of the Sanders worldview.

Britain is going to fiscal extremes under a Conservative government. France under a supply-sider of a president is doing the same. What makes the US distinct is that its debate does not stop at the near-term propping up of households and business. It touches on larger questions of distribution. Hence Romney’s ideas, which go beyond the usual payroll tax cuts and business loan guarantees of a chamber-of-commerce Republican.

In a time of contagion, the case for universal healthcare, at times a fog of detail, has also found painful simplicity: unless everyone has care, no one does. Sanders has lived long enough to see the normalisation of his once-weird views.

We are in the early stages of one of history’s periodic discontinuities in economic thought. The sharpest, perhaps, since the Opec oil crises that elevated the free-marketeers in the 1970s. Readers will suggest the crash in 2008, after which a biography of John Maynard Keynes announced the “return of the master”. Well, it was fleeting.

Before long, there were fiscal retrenchments around the western world. In the US, there was the Tea Party movement, the neutering of president Barack Obama by a Republican Congress, and his successor’s raid on the administrative state. The laissez-faire right was not much less ascendant in 2017, say, than in 2007.

This time feels different. For one thing, the stakes are higher. A virus promises a rather worse fate than mere immiseration. Nor can any section of society blame another. There will be no cable television blowhard pinning this on the poor, with their uppity dreams of home-ownership, and no Occupy movement. It is easier, then, to reach agreement, if not consensus, on larger and more active government. Even the left cannot squander this historic opening.

To my knowledge, there is no classical term for the inverse of a Pyrrhic victory: a defeat from which one ends up profiting. The absence is irritating because politics so often throws up events begging to be described as such.

In 1964, Barry Goldwater, with his heresies against the New Deal, suffered a huge loss for the Republicans in the presidential election. Except, in the end, he didn’t. “It just took 16 years to count the votes,” said the columnist George Will, about Ronald Reagan’s win in 1980.

His point was that Goldwater’s strident example had inspired the New Right. One-off defeat was a small price for the infusion of radical ideas into the national bloodstream. If anything, the loss gave him a martyr’s glamour.

These may be Sanders’s last days as a contender. Blanch as he might at the comparison, there is something of Goldwater about his career arc. The fringe years, the breakthrough, the electoral ceiling – and the ideological triumph via proxies. If it is his fate to watch the US embrace bigger government, but under the leadership of others, there are worse niches in history. He will not have to wait 16 years to see it. – Copyright The Financial Times Limited 2020