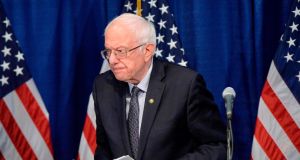 Bernie Sanders leaves a press conference after losing ground to Joe Biden in the campaign for the Democratic presidential nomination. Photograph: Joseph Prezioso/AFP via Getty

Bernie Sanders has vowed to continue his campaign for the Democratic presidential nomination, despite a number of disappointing finishes in primary contests across the country that have left the Vermont senator trailing former vice-president Joe Biden.

“Donald Trump is the most dangerous president in the modern history of our country, and he must be defeated,” Mr Sanders said at a press conference in his hometown of Burlington, Vermont on Wednesday afternoon. “I will do everything in my power to make that happen.”

Mr Sanders has often accused the Democratic establishment of lining up against him. But he struck a more conciliatory tone on Wednesday, saying he “very much” looked forward to a live televised debate on Sunday in Arizona “with my friend Joe Biden”.

The Vermont senator catalogued a series of policy-based questions he said he would ask Mr Biden on Sunday, including: “What are you going to do for the 500,000 people who go bankrupt in this country because of medically-related debt?”

Mr Sanders nevertheless conceded that Tuesday was “obviously . . . not a good night” for his campaign, “from a delegate point of view”.

Mr Biden won four of the six primaries held on Tuesday, with decisive victories in Michigan, Mississippi, Missouri and Idaho. Mr Sanders won North Dakota, and looked on course to take Washington state, where votes were still being counted.

But Tuesday’s results, coupled with an underwhelming “Super Tuesday” one week earlier, cemented Mr Sanders’s second-place status behind Mr Biden, whose campaign has staged an extraordinary comeback, starting with a near 30-point win in South Carolina last month and a sweep of southern states on Super Tuesday.

Mr Sanders said on Wednesday that while he was “losing the delegate count” he was “strongly winning” in terms of voter support for his progressive agenda, especially among younger people.

“We are winning the generational debate,” Mr Sanders (78) said. “Our campaign continues to win the vast majority of the votes of younger people. And I am talking about people not just in their 20s, but in their 30s and their 40s. The younger.”

He added: “Today I say to the Democratic establishment: in order to win in the future, you need to win the voters who represent the future of our country and you must speak to the issues of concern to them.

“You cannot simply be satisfied by winning the votes of people who are older.”

Mr Biden has benefited from a wave of high-profile endorsements in recent days from Democrats in Washington and across the country. Many of his backers are wary of a drawn-out primary contest similar to 2016, which they fear would weaken Mr Biden’s candidacy ahead of a general election against Mr Trump.

Guy Cecil, chairman of Priorities USA, a large Democratic political action committee (PAC), said on Twitter on Tuesday night: “The math is now clear. Joe Biden is going to be the Democratic nominee for president and Priorities USA is going to do everything we can to help him defeat Donald Trump in November.”

Mr Sanders has sworn off PAC money and eschewed big-money fundraisers in favour of small donations from individual supporters.

The Democratic National Committee said late on Tuesday that Sunday’s debate will be held without a live audience, amid fears over the spread of coronavirus. Both Mr Sanders and Mr Biden cancelled campaign events on Tuesday evening in Ohio, after local health officials warned against large gatherings.

“At the request of both campaigns and out of an abundance of caution, there will be no live audience at the Arizona debate,” said Xochitl Hinojosa, DNC communications director. “Our number one priority has and will continue to be the safety of our staff, campaigns, Arizonans and all those involved in the debate.” – Copyright The Financial Times Limited 2020