US Politics: Trump still in denial as grim reality of coronavirus becomes apparent 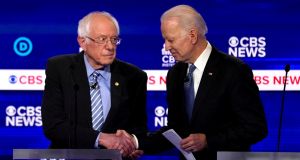 Senator Bernie Sanders shakes hands with Joe Biden. There is risk that Trump, Biden and Sanders will be exposed to the virus on the campaign trail. Photograph: Jonathan Ernst/Reuters

It is too early to say the Democratic nomination is all over bar the shouting. Bernie Sanders tends to project his voice and has not dropped out yet. But the outcome is no longer in much doubt.

Joe Biden’s victories in at least four of the six states that voted in this “mini-Super Tuesday’ – four of which Sanders had won in 2016 against Hillary Clinton – puts the former vice-president into an almost prohibitive lead.

Next week’s delegate-rich Florida primary could put him beyond reach. The real question is how long before Sanders bows to the inevitable, and on what terms. On that fraught negotiation – Sanders’s price for endorsing Biden – will hang the unity, or disunity, of the Democratic party.

But America’s mind had shifted to the epidemic even before these latest primaries. The grim reality of the spreading coronavirus has rapidly taken hold in the last few days.

As the political class speculated over the next round of voting, Americans woke up to the prospect of closing schools, remote working, temporary lay-offs, flight cancellations and the overnight arrival of the new etiquette of “social distancing”.

The creeping Italianisation of America’s response has all but shut down the live element of the Democratic campaigns. Both Biden and Sanders have cancelled future rallies. Their next debate – the first with just two of them – will take place on Sunday without an audience.

The question of whether America should adopt Italian-style containment is increasingly driving out other issues. Biden will give an address on Thursday laying out how he would tackle the epidemic. Donald Trump is feeding conspiracy theories that Democrats are exaggerating the contagion to trigger a recession. Shortly after Biden said that he was cancelling rallies, Trump announced his own mass gathering this weekend in Milwaukee.

As symbolic gestures go, Trump’s addiction to rallies may prove recklessly consequential. Just two weeks ago Trump told America that the number of coronavirus infections was likely to fall to zero. The tally of homegrown infections stood at 15 then. Now 984 are confirmed with the virus.

Were the US testing its citizens on the same scale as other countries, the true figure might be as high as 20,000, say epidemiologists – and rising exponentially. The gap between what Trump says and reality cannot be fixed on Twitter.

The second issue is an increasingly nasty exchange over mental health. Trump says Biden “doesn’t know where he is or what he’s doing”. Rudy Giuliani, his personal lawyer, said Biden had “dementia”.

There is no evidence Biden is suffering from anything other than ageing combined with a life-long stutter. To minimise the opportunities for gaffes – or “Bidenisms” – his aides have sharply curtailed his public addresses to a few minutes.

Trump’s team has no such control over the length or content of his appearances. The president’s claim to know more about epidemics than the experts – partly because his uncle was a scientist – reinforces questions about his own mental health. Biden has been responding in kind. Last weekend he ridiculed Trump’s self-description as a “very stable genius”.

That debate is brewing amid an epidemic that could trigger a US recession. Bloomberg’s average of forecasters now put the chances of that happening at more than 50 per cent. A recession would be highly damaging to Trump’s re-election chances, as could the perception that he is mismanaging the epidemic.

There is also a non-trivial risk that Trump, Biden and Sanders will be exposed to the virus on the campaign trail. Each is likelier to be shaking more hands than almost any other American.

Even with a shift to shoulder-clasping, and lots of hand sanitiser, they can hardly stick to the rules of social distancing. As septuagenarians, America’s presidential contenders are in a very high risk category.

All of which puts a very different gloss to the customary “stakes are high” election cliches. Welcome to a presidential campaign about the candidates’ sanity. Welcome also to politics in a time of contagion. – Copyright The Financial Times Limited 2020

1 ‘Summer is not lost’ - Taoiseach announces accelerated easing of coronavirus restrictions
2 California police fatally shoot 22-year-old man on knees with hands up
3 Coronavirus: People to be allowed to travel anywhere in their county from Monday
4 Donald Trump is in trouble, and that could spell very bad news
5 Covid-19 restrictions: What you still can’t do this weekend
Real news has value SUBSCRIBE