The Irish Times view on the US Democratic primaries: Joe Biden’s triumph 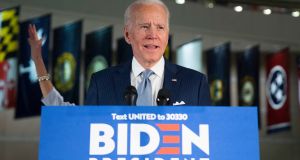 A week is a long time in politics: the Democratic presidential nomination race, which seemed so open 10 days ago, has been all but closed down and won by the centrist former vice-president Joe Biden. On Tuesday he won key primaries in Michigan, Missouri and Mississippi with overwhelming support from African-Americans and large margins among suburban and rural white voters.

In six states he took 153 of the party delegates to 89 for Sanders, and now controls two fifths of the convention. In part it was the growing sense that the ‘defeat-Trump’ imperative had to be prosecuted from the centre. In part it was the reality that the winnowing of the candidate field down to two did not serve to boost Sanders’s vote as much as expose the vulnerability of his support base.

Bernie Sanders, champion of a working class “revolution”, may be the most progressive in the Democratic field but that does not mean his former supporters, many of them working class men with right-of-centre views, are the most progressive. Most specifically on the women’s issue – it is clear that a substantial part of his 2016 vote was largely “anyone-but-Hillary”. It vanished in Michigan, a state which four years ago helped power his challenge to Clinton for the Democratic nomination. Sanders was routed, Biden capturing 53 per cent to 37 per cent of the vote. The truth is 10 to 12 per cent of Sanders’s 2016 primary voters cast ballots for Trump in the general election. Another 12 per cent either voted for third-party candidates or sat the election out.

Biden’s success last week on Super Tuesday, it is clear, was no flash in the pan and his winning margin of delegates should ensure that the party convention will not now be contested and will be little more than an enthronement of the Democratic nominee. Sanders shows little inclination yet to throw in the towel, however, and younger and more liberal party supporters remain firmly committed to his cause. For candidate Biden the challenge now will increasingly be to ensure they do not lose their enthusiasm for defeating Trump and that they turn out on election day.

1 Irish tourists excluded from visiting Greece as country begins its tourism season
2 Connell losing touch with the club championship is the real tragedy of Normal People
3 We need to pay very close attention to what is happening in Britain now
4 Coronavirus: Nine more deaths reported in the Republic
5 Patience wearing thin as three parties crawl towards a government
Real news has value SUBSCRIBE