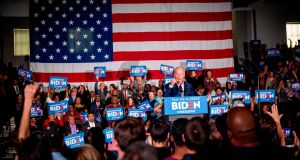 Democratic presidential candidate Joe Biden: A poll on Monday showed him with a 24-point lead over Bernie Sanders in Michigan. Photograph: Emily Kask

Primary voters in six US states go to the polls on Tuesday to choose their candidate for the Democratic presidential nomination in a series of primaries and caucuses being dubbed “Super Tuesday 2”.

Mississippi in the south, and the midwestern states of Missouri, Idaho and North Dakota, are holding contests, as well as Washington State on the Pacific coast.

Michigan will be the largest state to vote, a week after the Super Tuesday contest which saw 14 states make their choice for the Democratic nominee. The rust-belt state will send a total of 147 pledged and super delegates to the Democratic National Convention in Wisconsin in July.

The two front-runners – Bernie Sanders of Vermont and former Delaware senator and vice-president Joe Biden – spent the eve of the primary campaigning in the state.

Sanders is advocating a publicly funded healthcare system known as Medicare for All, but opponents say it has little hope of passing Congress

Speaking at his first campaign engagement of the day at a health centre in Grand Rapids, western Michigan, Mr Biden took aim at the healthcare policies of his rival. “I’m not running to destroy Obamacare . . . to start from scratch and hope something will pass. I’m running to protect the progress we fought for.”

He said that voters did not want to wait for a “revolution” in healthcare but wanted policies that could be implemented, arguing that the state’s expansion of Medicaid – the health insurance scheme that covers low-income Americans – together with the expansion of Obamacare would insure “millions more” Michigan residents.

Mr Sanders is advocating a publicly funded healthcare system known as Medicare for All, but opponents say it has little hope of passing Congress and would cost trillions of dollars to finance.

Mr Biden, who travelled to Flint, Michigan, on Monday afternoon, was due to hold a rally on Monday night in Detroit. In an echo of Super Tuesday, when several of his former rivals joined him in Dallas for a rally on the eve of voting, former presidential candidates Kamala Harris and Cory Booker were due to join him on stage on Monday night.

Mr Booker, the senator from New Jersey who dropped out of the presidential race in January, endorsed the former vice-president on Monday, despite clashing with Mr Biden during Democratic debates last year.

Biden’s recent success has buoyed his candidacy, and he is expected to do well among African-American voters in particular as well as in suburban areas

“The answer to hatred & division is to reignite our spirit of common purpose,” he wrote on Twitter. “Joe Biden won’t only win – he’ll show there’s more that unites us than divides us. He’ll restore honour to the Oval Office and tackle our most pressing challenges.”

Mr Booker’s endorsement came a day after Ms Harris also threw her backing behind Mr Biden. Ms Harris and Mr Booker are two of the most prominent African-American politicians in the Senate. Their endorsement means that virtually all of the former Democratic candidates have backed Mr Biden, although Elizabeth Warren has yet to endorse a candidate after ending her campaign last Thursday.

Mr Biden has become the favourite in the race to become the nominee to take on Donald Trump in November’s presidential election, after he scored a decisive win in the South Carolina primary and victories in 10 of the 14 states that voted on Super Tuesday.

A poll on Monday showed Mr Biden with a 24-point lead over Mr Sanders in Michigan. According to the Detroit Free Press survey, Mr Biden is on 51 per cent in Michigan, compared with Mr Sanders’s 27 per cent.

A defeat for Mr Sanders would be highly damaging to his candidacy. He won the state in the 2016 primary against Hillary Clinton, and had been ahead in polls before Mr Biden’s surge.

But Mr Biden’s recent success has buoyed his candidacy, and he is expected to do well among African-American voters in particular as well as in suburban areas.

Mr Sanders has said he will not end his campaign if he does not win in Michigan, though he faces a tough series of primaries over the next few weeks.

Though Mr Biden has been late to campaigning in Michigan, his team was running ads on local radio on Monday, highlighting the former vice-president’s support for the car industry during the financial crisis under the Obama presidency.

In the Detroit News, Mr Biden wrote: “I put my faith in Michigan in the depths of the Great Recession – and if you believe, as I do, that our greatest days still lie ahead, I hope that you’ll put your faith in Team Joe on Tuesday.”