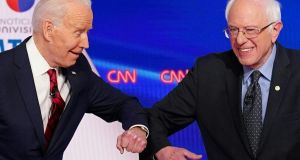 Democratic presidential hopefuls former US vice president Joe Biden and senator Bernie Sanders greet each other with an elbow bump before the start of their debate in Washington, DC on Sunday. Photograph: Mandel Ngan/AFP via Getty Images

Democratic presidential hopeful Joe Biden pledged to choose a woman as his running mate if he is selected as the party’s nominee, as he participated in the first one-on-one debate with his rival Bernie Sanders on Sunday night.

The former vice-president, who has emerged as the frontrunner to take on Donald Trump in November’s presidential election, also reiterated his pledge to appoint the first black woman to the supreme court, saying it was “long overdue”.

While Mr Sanders gave a less definitive answer to whether he would choose a female running mate, saying he would “in all likelihood”, Mr Biden’s public commitment prompted immediate speculation as to who his choice would be.

Senators Kamala Harris and Amy Klobuchar – who both ran for the party’s nomination but have since endorsed Mr Biden – and Georgia’s former governor Stacey Abrams were among the names mentioned. Michigan’s governor Gretchen Whitmer, a high-profile endorser of Mr Biden, whose support may have helped him to his victory in the state’s primary last Tuesday, ruled herself out in an interview with MSNBC. “It’s not going to be me,” she said.

The televised debate between the two Democratic front-runners took place despite mounting public concern in the United States about the coronavirus threat. As a response to the coronavirus pandemic, CNN moved the debate from Arizona to the network’s studio in Washington DC. There was no audience, and the two presidential hopefuls stood six feet apart on stage, greeting each other with “elbow bumps” rather than the traditional handshake.

From the outset of the debate, the focus was on the rapidly-spreading pandemic.

Mr Sanders argued that the coronavirus crisis made the case for his proposed public healthcare system, Medicare for All, even stronger. “Let’s be honest and understand that this coronavirus pandemic exposes the incredible weakness and dysfunctionality of our current healthcare system.”

I wash my hands God knows how many times a day. I carry with me, in my bag outside here, hand sanitiser

But Mr Biden pointed out that Italy has a single-payer healthcare system. “It doesn’t work there,” he said, referring to the crisis in the Italian healthcare system as it struggles to cope with the spike in Covid-19 cases there.

Both men – who are in their late 70s and as a result are more vulnerable to the pandemic than the average citizen – were asked how they were protecting themselves from contracting the disease. “I’m using a lot of soap and hand-santisers,” said Mr Sanders.

The debate took place as four states prepare to vote in Democratic primaries on Tuesday. As of Monday evening, Florida, Arizona, Illinois and Ohio were still planning on holding the primary contests as scheduled. Mr Biden, who has clocked up decisive victories in a string of states since his game-changing victory in South Carolina just over two weeks ago, is expected to perform well in Florida in particular. The state is seen as a bellwether for the country as a whole, and its swing-state status tends to play a crucial role in the general election.

Two states – Louisiana and Georgia – have delayed their primaries, which had been due to take place in the coming weeks.

Though Sunday night’s debate was rancorous at times, both Mr Biden and Mr Sanders said they would support the other if chosen as the party’s nominee. The candidate with a majority of state delegates will be chosen as the Democratic nominee at the party’s conference in Milwaukee in July.