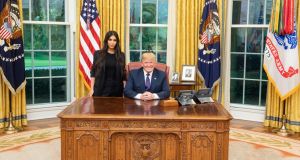 President Donald Trump with Kim Kardashian at the Oval Office in the White House. Photograph: Twitter

A month after her husband praised Donald Trump as a “brother” who shared his “dragon energy”, Kim Kardashian West met the US President in the Oval Office.

The reality TV star, who is married to the rapper Kanye West, met Mr Trump on Wednesday to discuss prison reform. The reality TV star went to the White House to highlight the case of Alice Johnson, a 63-year-old woman who was sentenced to life in prison in 1996 for charges relating to cocaine possession and money-laundering.

Kardashian West began championing Johnson’s cause after viewing a video of her story on the internet, and has called for her to be released. She was initially scheduled to meet the president’s son-in-law, Jared Kushner, who is leading the administration’s policy on prison reform, along with other senior officials. But she also met Mr Trump in the Oval Office.

I would like to thank President Trump for his time this afternoon. It is our hope that the President will grant clemency to Ms. Alice Marie Johnson who is serving a life sentence for a first-time, non-violent drug offense.

In a tweet Mr Trump said he had had a “great meeting” with Kardashian West, and they had discussed prison reform and sentencing.

The 37-year-old celebrity urged the president to grant clemency to Johnson. “I would like to thank President Trump for his time this afternoon,” she said on twitter. “It is our hope that the President will grant clemency to Ms Alice Marie Johnson who is serving a life sentence for a first-time, non-violent drug offense.”

Kanye West, a prominent African-American hip-hop artist, prompted controversy among his fans when he visited Mr Trump during the presidential transition period in Trump Tower. He also said during a concert that while he didn’t vote in the 2016 presidential election, he would have voted for Donald Trump.

Defending his tweet lauding Mr Trump as his “brother” in April, West wrote: “You don’t have to agree with trump but the mob can’t make me not love him.”