US Politics: Emboldened future presidents might be drawn to more wide-ranging confrontations 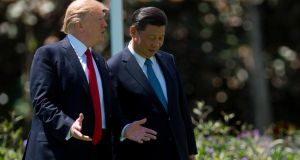 A year has passed since Donald Trump ended an era of relative comity between the two greatest powers in the world. The US president’s trade tariffs against China provoked countermeasures and counter-countermeasures that flustered markets and even inspired some lurid prognostications of a new cold war.

Now, we learn, a truce is in the offing. The two sides are in promising discussions in Washington. An agreement is “closer and closer”, reports Larry Kudlow, the economic adviser to Trump.

Well that, to misquote the internet meme, de-escalated quickly. It is easy to see why. A US-China accord would perk up the economic mood all over the world, and that, for a president 18 months from an election, is an irresistible prize. Trump could offer voters statesmanlike lustre after teasing concessions from a foreign power, without the pain of lasting conflict.

Before the world toasts the avoidance of a second cold war, though, consider a bleak alternative: the real showdown will occur after Trump’s presidency. What we now see as a shocking rupture in US-China relations might come to seem a relative Eden. And the man we now see as a spoiler of the peace could be a friend of it.

Trump’s belligerent style distracts from the fact that he has very few grievances with the other side. Essentially, he has just the one: trade. He believes that Beijing has played a guileless America like a fiddle in their economic dealings since at least the 1990s. It is an intense, long-held and sometimes exaggerated complaint. But it is just one complaint. And, being a practical matter, to do with handbag tariffs and technology transfer, it is possible to negotiate it away.

Beyond the economics, his wariness towards China is not obviously more pronounced than that of a generic US president. Given his taste for strong governments, perhaps it is less so. Say what you will about Trump’s bean-counting mercantilism – his belief that current-account deficits are always and everywhere for suckers – it is at least a contained obsession. He is not interested in a wider clash of philosophies with China because he has no wider philosophy.

What Trump has instead is his life-long idée fixe: that any transaction has a winner and a loser, and America has lost for too long.

A list of subjects in which the president takes little or no interest, then, might include: Chinese internal affairs, the insecurity of US allies in Asia, the diplomatic favour of African countries as China invests all over their continent, the viability of international bodies in which a rising power has little stake, and the ideological tussle between democracy and one-party rule for mastery of the 21st century. These are the things that are likely to set the two powers against each other in the coming decades. Under this presidency, they are all secondary to trade.

In other words, it is Trump’s very narrowness that is keeping a lid on great-power tension. His view of the world as a kind of polyglot bazaar, in which the central goal is to avoid being ripped off, is hardly stirring. But it serves the international order by limiting US-China enmities to the negotiable realm of economics. He does not expect a foreign power to change its essential character or ambitions.

It is at our own peril that we wish for a more expansive Trumpian foreign policy, informed by “values” and a broader construal of the national interest. We are likely to find out one way or the other. It is improbable that the US will have another president with such an economic monomania. Trump has not just a chief executive’s limited vision of geopolitics, but a chief financial officer’s, or even an accountant’s.

Trump the China dove: as recently as 2018, this idea would have read like so much try-hard contrarianism. By the end of 2019, it might be just a mildly subversive proposition. The speed with which he appears to be reaching a trade pact with Beijing suggests that this is all he ultimately cares about. That is unlikely to be true of his successors.

Until now, it has been soothing to regard Trump as the storm before the calm. He would disrupt US-China relations and future leaders would mend them again. But the opposite could be true. By breaking the taboo against confrontation, Trump has emboldened successors with far wider-ranging grievances than trade to vent them.

If they do, skirmishes over washing-machine tariffs would count as the good old days. An uneasy thought, is it not, that one of the president’s lowest qualities, his materialism, could be a force for peace. – Copyright The Financial Times Limited 2019