Speaking at a rally in Grand Rapids, Michigan, US president Donald Trump has hit out at the Democrats and Robert Mueller, claiming he was "completely vindicated" by the special counsel’s Russia investigation. Video: C-Span 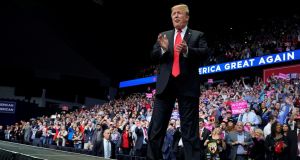 US president Donald Trump, fresh off what he claims was “total vindication” in the special counsel’s Russia investigation, has told supporters he has vanquished a corrupt cabal of Democrats, the news media and the Washington elite, who tried to nullify his historic election victory by painting him as an agent of Russia.

“After three years of lies and smears and slander, the Russia hoax is finally dead,” Mr Trump declared. “The collusion delusion is over.”

In his first rally since the end of the 22-month investigation, Mr Trump gleefully disregarded the old saw about revenge being a dish best served cold. He came onstage hot and served up one scorching zinger after another, taking particular delight in ridiculing Adam Schiff, chairman of the House of Representatives intelligence committee, and other Democrats who have led calls to investigate Mr Trump.

It was a calculated show of outrage by a president who has decided to seize on the Russia investigation to frame his ordeal as a conspiracy by his rivals to delegitimise him and diminish his achievements.

Mr Trump has always peppered his speeches with “hells” and “damns,” but on Thursday, he crossed the line into cruder language. “The Democrats need to decide whether they will continue to defraud the public with ridiculous bullshit,” he said.

In vilifying his opponents, Mr Trump was not troubled by the fact that the 300-plus-page report by Robert Mueller, the special counsel, has yet to be released, or that attorney general William Barr, in his summary of Mr Mueller’s findings, stipulated that the report did not exonerate the president, even if it did not find him guilty of conspiracy or of obstructing justice.

In many ways, the speech was a return to first principles for Mr Trump, reviving an insurgent scene that had fuelled his campaign in 2016. He said the Russia investigation underlined the need to “drain the swamp”, and he celebrated his cheering supporters over what he described as the faithless elites in Washington.

Mr Trump also went after the “fake news” media, celebrating what he claimed was a sharp decline in ratings for CNN and MSNBC after the Mueller findings were released, and predicting they would never regain their credibility.

The president, however, made an exception for Fox News, praising the network’s lineup by its commentators’ first names: Sean (Hannity), Tucker (Carlson) and Jeanine (Pirro), noting with pleasure that “Jeanine is back!” – a reference to Pirro’s brief suspension after she made disparaging comments on the air about a woman in Muslim dress.

Mr Trump called the Russia investigation an extravagant waste of time that detracted from an administration that he insisted had a sterling record. “The Russia witch hunt was a plan by those who lost the election to try and illegally gain power by framing innocent Americans,” he declared. “Despite this phony corrupt disgusting cloud, we’ve done more together in the first two years than any administration in history.”

Grand Rapids holds special meaning for Mr Trump, as the site of his final campaign rally before his upset victory in 2016. He won Michigan by fewer than 11,000 votes – two-tenths of 1 percent – the first Republican to do so since 1984. It was one of three Midwestern states – along with Pennsylvania and Wisconsin – that cemented his victory over his Democratic opponent, Hillary Clinton.

Grand Rapids was also the hometown of another president, Gerald Ford, whose presidential museum sits across the river from the arena where Mr Trump spoke – a monument to the moderate Republicanism that the president has banished and the Washington establishment that he has upended.

The timing of the rally so soon after Mr Barr’s disclosures prompted greater-than-usual concerns about security, given Mr Trump’s habit of stirring up the crowd and heaping abuse on reporters. At his last rally in El Paso, Texas, a member of the audience assaulted a BBC cameraman.

The signs of tighter security in Grand Rapids included more visible security personnel and sturdier barriers between the news media and the audience. In El Paso, reporters were seated in the stands, unprotected from the crowd. The mood in the arena, however, was no more intense than at other Trump rallies. If anything, the crowd seemed a bit sedate as he began speaking. Many held up signs that said “Jobs, Jobs, Jobs,” reflecting the economic priorities that drive voting in this Rust Belt state.

And for all his indignation at the start of the speech, Mr Trump lapsed into well-worn themes later in the one hour and 22-minute speech, even delivering a leisurely reminiscence about his election victory. “Bill Clinton said ‘you better get up to Michigan’,” Mr Trump said in an interlude that mocked the former president’s efforts to convince Hillary Clinton’s advisers to pay more attention to the state. “And do you remember, this was my last stop?”

On Sunday evening, after Mr Barr delivered his summary of the Mueller report, the president, who was in Palm Beach, Florida, was urged by his aides to avoid a tone of triumphalism in his reaction. That lasted for about an hour, until he delivered an angry denunciation of those behind the investigation before he returned to Washington.

As the days wore on, Mr Trump took aim at news organisations and demanded the resignation of Democrats such as Mr Schiff, whom he accused of lying repeatedly in discussing potential collusion between Mr Trump and the Russians. In a warm-up rally more than an hour before Mr Trump arrived, Laura Cox, the chairwoman of the Michigan Republican Party, led the crowd in chants of “No Collusion! No Obstruction!” The crowd also chanted “Lock her up!” after Ms Cox denounced Ms Clinton for counting Harvey Weinstein as one of her supporters.

On the flight to Grand Rapids, Corey Lewandowski and David Bossie, two former campaign advisers known for riling up Mr Trump on Air Force One before his rallies, were aboard. Inside the White House, aides were concerned about the two of them tagging along – and possibly having open access to the president – but ultimately did not take steps to limit their travel, according to a person familiar with the planning.

Mr Trump has long savoured his victory in Michigan. But the state could be more of an uphill struggle in 2020. Democrats made significant gains in the 2018 midterm elections, including winning the governorship. General Motors, one of Michigan’s key employers, has laid off workers, despite Mr Trump’s efforts to pressure the carmaker to expand manufacturing in the United States.

He also faces headwinds in winning congressional passage of the retooled version of the North American Free Trade Agreement, which he has promoted as benefitting workers in Michigan.

Inside the arena, however, Mr Trump’s supporters basked in the glow of the president’s claims of vindication and expressed indignation on his behalf at the proliferating investigations into him and his administration. “He went through so much persecution,” said Brenda Freye, a medical assistant from nearby Muskegon, who recalled attending his campaign rally here in November 2016. “They were so unfair to him.” – New York Times