As Trump sells ‘luck of Irish’ products, others draw on Ireland’s values

America Letter: With or without St Patrick’s Day events, Irish-American vote is key 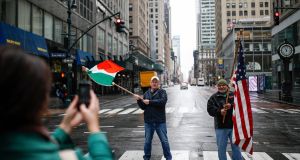 Dermot Hickey and Phillip Vega get their picture taken on a near-empty Fifth Avenue: Joe Biden is reaching out to the Irish-American community. Photograph: John Minchillo

As American life ground to a halt this week once the country belatedly woke up to the threat of coronavirus, one casualty of the lockdown was the annual St Patrick’s Day parade.

Across the United States, parades were cancelled, including the traditional New York celebration, the oldest in the country.

The streets of Manhattan were eerily quiet as businesses closed their doors and the lights of Broadway were extinguished, the green bunting and flags stored away for another year.

But Ireland’s national holiday did not go unnoticed by the country’s political operatives. On Tuesday, campaigns for the two men most likely to face off in November’s presidential election took to the phones and internet to tap the Irish-American vote.

According to the Trump campaign, the new coalition aims to “bring the Irish-American community together and to share their support for President Trump”.

It noted the recent appointment of outgoing White House chief of staff Mick Mulvaney as special envoy to Northern Ireland. “Irish Americans across the country understand the importance of keeping President Donald Trump in the White House.”

Interested parties were encouraged to text “shamrock” to a phone number, while Irish-American merchandise was available on the Trump-Pence website. Offers included “Irish Americans for Trump” T-shirts for $30 (€28), a “St Paddy’s 2020” Keep America Great baseball hat in green and gold, and a set of two “Trump Luck of the Irish” whiskey glasses for $30 with the name Trump embroidered on a golden shamrock.

On the Democratic side, the Joe Biden campaign was ahead of the curve in reaching out to the Irish-American community on the national holiday.

The former vice-president, whose ancestors emigrated from Ireland in the 19th century, often references his Irish heritage and has visited Ireland several times.

On Tuesday, his campaign team held a conference call for Irish Americans across the country to mark St Patrick’s Day.

John McCarthy, the campaign’s deputy national political director, was joined by senior members of the Biden team. These included Valerie Biden Owens, the younger sister and campaign aide to the former vice-president, and Terry McAuliffe, the former governor of Virginia and close friend of Bill Clinton.

Biden Owens spoke about the importance of Irish values at this time in American politics. The Irish “understand that the heroic in life is everyday people doing everyday things to the best of their ability”, she said. “We have to hold on to that collectively as Americans . . . in these perilous times.”

McAuliffe noted that St Patrick’s Day was “the day to remember all the forefathers who made this a great country. It’s incumbent to all of us on this call that the opportunities we have had, the next generation of Irish Americans have as well”.

The briefing also revealed some interesting insights into the current state of the Biden campaign. Though the coronavirus crisis has turned the spotlight away from the primary campaign, and several states have delayed their primaries, Joe Biden has cemented his lead in recent weeks, clocking up victories across the country.

McAuliffe briefed listeners on the latest research. Noting Biden’s strong performance among African-Americans, women and suburban voters in the primaries so far, he said that Biden had put together a coalition “that I haven’t seen for a very long time”.

“Barack Obama and Hillary Clinton did not get these numbers this early,” he said. But he warned that “beating Donald Trump is not going to be easy”.

“He will have two to three billion dollars. It is hard to run against someone who will lie every single day. That’s why we need Joe Biden,” he said.

Though the Irish-American vote is far from homogenous, a huge bloc of official Irish-America has coalesced behind Biden from the start of his campaign. Figures such as former US ambassador Kevin O’Malley, philanthropist Elizabeth Frawley Bagley and current and former Irish-American congress members such as Brendan Boyle and Chris Dodd were early endorsers.

McCarthy, an Irish-American named this year on the Forbes “30 under 30” list, is the former senior aide to Boyle on Capitol Hill. Biden also has strong links with the Irish Embassy in Washington. While the cancellation of this year’s White House shamrock ceremony due to coronavirus is likely to be an anomaly, the Irish Government will be hoping that a president friendly to Ireland will be in place after the November 3rd election.