Joe Biden promises to choose a woman as his running mate 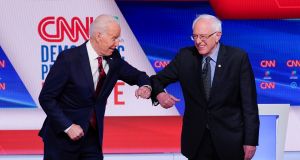 Joe Biden vowed to pick a female running mate if he won the Democratic presidential nomination, while Bernie Sanders only said he would “in all likelihood” take that path.

Mr Biden, the former vice-president and frontrunner for the Democratic presidential nomination, said there were “a number of women who are qualified to be president”.

“I would pick a woman to be my vice-president,” Mr Biden said in his first one-on-one debate with Mr Sanders since the Democratic primary race narrowed to the two men.

Asked whether he would do the same, the Vermont socialist senator said: “There are progressive women out there so my very strong tendency is to move in that direction.”

Mr Biden made the pledge three weeks after he promised to name an African-American woman to the supreme court. The debate came days after Mr Biden won at least four of the six states that voted on Tuesday, cementing his standing as the frontrunner.

In the debate, which was held without an audience because of the coronavirus outbreak, they rehashed many of the arguments – from healthcare to climate change – that featured in previous debates, and also stressed the need to take a different approach to the virus than Mr Trump.

In an exchange that would have been harder when his campaign was struggling, Mr Biden urged Mr Sanders to back him if he won. “If Bernie is the nominee . . . I will campaign for him. And I believe the people who support me will do the same thing,” Mr Biden said. “I would hope that Bernie would do the same thing if I’m the nominee.”

After two dozen contests, Mr Biden leads the delegate race 890-736. He is expected to stretch that lead on Tuesday when Florida, Arizona, Ohio and Illinois vote.

Some Democrats worry that Mr Sanders will refuse to quit even if it is mathematically impossible to win because he wants his ideas to be debated – a move that could hurt Mr Biden as he prepares for a brutal general election battle against Donald Trump.

“If I lose this thing . . . Joe I will be there for you,” Mr Sanders (78) said to his rival, who was standing six feet away due to coronavirus fears. . “But I have my doubts about how you win a general election against Trump . . . unless you have energy, excitement, the largest voter turnout in history.”

That prompted a sharp rebuttal from Mr Biden (77), whose cash-poor campaign was resurrected in South Carolina last month and went on to sweep much of the south and several other states across the country. “Just get this straight. The energy and excitement that has taken place so far has been for me.” – Copyright The Financial Times Limited 2020