Garbled Trump speech may be his Katrina moment

America Letter: Science-denying US president in uncharted territory with Covid-19 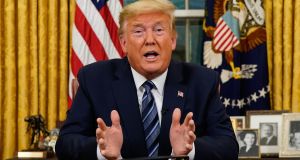 Could this be Donald Trump’s Katrina moment?

The presidency of George W Bush was defined by his response to the 2005 hurricane that devastated New Orleans. As the hurricane hit, Bush remained at his ranch in Texas. When he did decide to visit, he surveyed the damage from a plane, the image of an aloof president peering out from an aircraft window at the devastation beneath becoming a symbol of his detachment from the crisis.

Coronavirus has plunged Trump into uncharted territory. How does a president who has rejected scientific facts around climate change deal with one of the biggest global health threats in decades?

How does he convince a nation, half of which does not trust the president, that he can be a reliable source of news and information about the disease given his questioning of established facts in the past?

Wednesday night’s address to the nation is likely to be viewed by historians as one of the worst in presidential history.

Trump’s 10-minute speech from the Oval Office was stilted, confusing and counter-productive. Having spent the past few weeks dismissing the Covid-19 threat as a hoax, Trump announced one of the most draconian options available to him – banning flights from Europe to America.

But even then the message was garbled. It quickly emerged that the European travel ban only related to the Schengen zone, thereby excluding Britain and Ireland but including other non-EU countries like Switzerland and Iceland.

Within an hour of the speech he was forced to clarify on Twitter that the announcement did not cover goods, despite explicitly saying that cargo and trade would be impacted. Similarly, officials rushed to communicate that US citizens would not be affected by the ban.

The impact of Trump’s address was swift and brutal. Markets on the other side of the world tanked. On Thursday morning, Wall Street’s emergency circuit breaker was triggered for the second time this week, halting trading for 15 minutes. By lunchtime, the Federal Reserve had announced a massive $1.5 trillion injection, but still the markets fell, clocking up their biggest one-day loss since Black Monday in 1987.

In the National Building Museum in Washington, at one of the last big public events to take place in the capital ahead of museum closures and event cancellations this weekend, news of the presidential announcement rippled through the audience at the annual St Patrick’s Day Ireland Funds dinner.

Taoiseach Leo Varadkar, who had just flown in, was brought into an adjacent room where he was briefed by officials. Some of the most senior figures in Washington were at the event when the news broke – House speaker Nancy Pelosi, senior members of Congress, the British chargé d’affaires. All were blindsided by the announcement of travel restrictions coming from the White House.

The travel ban is the latest evidence of Trump’s troubled relationship with Europe. Asked in the Oval Office on Thursday why he did not inform European leaders in advance of his decision, he replied: “We had to move quickly.” But he added: “I mean, when they raise taxes on us, they don’t consult us” – an unambiguous reminder that there is no love lost between the administration and Brussels.

The next few weeks will be a major test for the Trump presidency, with coronavirus presenting a potential pitfall in an election year.

As well as the fear that the scale of America’s coronavirus problem has yet to be revealed due to a dearth of testing kits, the stock market rout is likely to be weighing on the president’s mind, given that so much of his re-election narrative is based on the strong economy.

Speaking on the president’ favourite TV show, Fox and Friends, on Friday, one of Trump’s most prominent Christian supporters, Jerry Falwell jnr, wondered if there was not some “political reason” for the media attention on coronavirus.

He also raised the theory that North Korea had concocted the virus in conjunction with China. Trump may be facing a definitive moment. But for his loyal band of supporters across America, it is going to take a lot to undermine their commitment to the president.