Alabama Senate votes to ban abortion in most cases

Alabama's state Senate has passed a bill to outlaw nearly all abortions, creating exceptions only to protect the mother's health, as part of a multistate effort to have the U.S. Supreme Court reconsider a woman's constitutional right to an abortion. 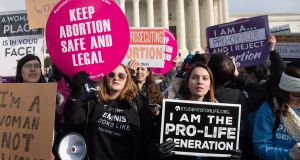 Alabama has become the latest US state to limit abortion access, voting to outlaw abortion in almost all cases.

The legislation, which was backed by the state Senate in a vote on Tuesday night, outlaws abortion except in cases where there is a serious threat to a woman’s life.

In addition, doctors who perform terminations could be charged with a felony and face up to 99 years in prison unless it is found that the woman’s health is at serious risk. An amendment tabled by Democrats on Tuesday to allow abortions in the case of rape or incest was defeated. The vote in the Alabama Senate took place after four hours of debate in the chamber.

Having already passed the lower house in the Alabama assembly, it now falls to the governor to sign the bill. Though she has not publicly commented on the issue, Kay Ivey has previously indicated her opposition to abortion. If the bill is signed, it will enter into effect within six months.

The new legislation is likely to be immediately challenged – and overturned – in court. But it could also force the US supreme Court to take up the case, a move that would be welcomed by many of the law’s backers, who hope that the court may overturn Roe v Wade, the 1973 supreme court ruling that legalised abortion.

The Republican lawmaker who sponsored the bill, Terri Collins, has said that she hopes the supreme court will take up the Alabama law, which directly challenges Roe v Wade.

Leana Wen, the head of pro-choice group Planned Parenthood, said her group would challenge the measure if it took effect. “We have no choice. For us, this is about our patients’ lives,” she said. “We have to file lawsuits. We are talking about the rights for generations to come.”

The American Civil Liberties Union (ACLU) also said it would mount a legal challenge. “Alabama’s legislature just passed a law that criminalises doctors and makes abortion illegal,” the organisation said. “Abortion is not a crime – it’s a constitutional right. We will sue to stop this law from ever taking effect.”

Several Democratic candidates for president also weighed in on the issue. “We see this for what it is: a direct attack on Roe v Wade, and on women all across this country,” said Massachusetts senator Elizabeth Warren. “We will fight these attacks every step of the way.”

New Jersey senator Cory Booker, another presidential hopeful, tweeted: “I will fight in solidarity with women to make sure rights guaranteed by Roe v Wade will not be threatened by those who have no business making laws about their bodies.”

Former presidential candidate Hillary Clinton also criticised the move. “None of us should accept a future in which our daughters and granddaughters have fewer rights than we do.”

The nomination of two conservative justices to the highest court in the land since Donald Trump was elected president has tilted the ideological balance of the supreme court to the right, prompting hopes among anti-abortion Americans that the landmark 1973 ruling could be overturned.

Judges Neil Gorsuch and Brett Kavanaugh were nominated by Mr Trump and approved by the Senate over the last two years.

The development in Alabama mirrors similar trends across the country. Numerous states have introduced more restrictive rules around abortion in the last year.

Last week, Georgia became the latest state to introduce a so-called “heartbeat bill” – banning abortions after six weeks, a point in the pregnancy when many women may not know they are pregnant. It follows similar bills in states such as Ohio, Iowa and North Dakota. New York, in contrast, has liberalised its laws this year, allowing for abortions over 24 weeks in some cases.