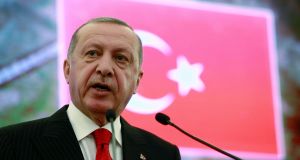 Turkish president Recep Tayyip Erdogan who spoke of ‘increasing attempts to violate our rights in the eastern Mediterranean and Aegean’, suggesting a wish to assert Turkish rights in Greece as well as in Cyprus

Turkey has given additional military support to its vessel drilling for gas and oil off the shores of Cyprus – a move deemed illegal by the EU and US – by mounting a naval exercise in the eastern Mediterranean, Aegean and Black Sea.

Turkish naval exercises, which were launched on Monday and involve scores of warships and aircraft, will continue until May 25th. The exercises appear designed to serve as a warning not to interfere with Turkey’s sophisticated drilling ship Fatih, which has begun four months of operations off the Cypriot coast west of Paphos with the support of three navy vessels.

Ahead of the exercises, Turkish president Recep Tayyip Erdogan spoke of “increasing attempts to violate our rights in the eastern Mediterranean and Aegean”, suggesting a wish to assert Turkish rights not only in Cyprus, but also in Greece.

Cypriot president Nicos Anastasiades called Ankara’s activities “a second invasion”, referring to Turkey’s 1974 invasion and occupation of the northern 36 per cent of Cyprus, which divided the island between Greek and Turkish Cypriots. He said it was impossible to resume UN-mediated talks to reunify the island while Cyprus remains under threat.

Speaking on behalf of EU foreign ministers, diplomatic chief Federica Mogherini said: “We call on Turkey to show restraint, respect the sovereign rights of Cyprus in its exclusive economic zone [EEZ]and refrain from any such illegal action, to which the European Union will respond appropriately and in full solidarity with Cyprus.”

US state department spokesman Morgan Ortagus said: “The United States is deeply concerned by Turkey’s announced intentions to begin offshore drilling operations in an area claimed by the Republic of Cyprus as its [EEZ]. This step is highly provocative and risks raising tensions in the region. We urge Turkish authorities to halt these operations and encourage all parties to act with restraint.”

Neither the EU nor the US has proposed measures to counter Turkey’s move, while Cyprus has responded by submitting a complaint to the UN, which failed to deter earlier Turkish exploration and drilling.

Cyprus is in a weak position because Turkey has refused to sign the UN Convention on the Law of the Sea, which defines a state’s maritime zone and rights. Turkey claims its continental shelf not only takes in internationally recognised portions of Cyprus’s EEZ, but extends westwards to Crete in Greece’s EEZ. Turkey, reportedly, seeks to share the coastal energy resources of both countries.

Turkey’s military exercises and the row over its offshore drilling coincide with Cypriot negotiations with France’s Total and Italy’s ENI for an exploration licence for one EEZ block. US giant ExxonMobil is involved in deep-water drilling south of the port of Limassol.

Turkey argues that Cyprus cannot exploit its offshore gas and oil wealth until Greek and Turkish Cypriots reach a political settlement and both communities can share revenues. UN efforts to reunite the island have, so far, failed. Neither Greek nor Turkish Cypriots are optimistic.