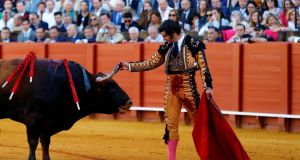 Spanish matador Morante de la Puebla touches the horn of a bull during a bullfight at The Maestranza bullring in the Andalusian capital of Seville. Photograph: Marcelo del Pozo/Reuters

A well-known matador’s treatment of the bull he was facing has drawn the ire of Spanish animal rights campaigners and once again thrown bullfighting into controversy. But the focus of the uproar is neither a sword nor a cape – it is a handkerchief.

In a bullfight at Seville’s prestigious spring festival on Friday, Morante de la Puebla surprised the public shortly before killing the bull he was facing. With the animal immobile and bleeding from its neck and back, where spiked sticks had been planted as is customary, video footage showed the bullfighter taking a handkerchief from his pocket and delicately wiping the bull’s face, just beneath the eyes.

The footage soon went viral, drawing admiration from some and fierce criticism from others.

The bullfighting website esDeToros said the gesture was one of the highlights of the Seville festival, interpreting it as Morante wiping tears from the bull’s eyes. One fan, who also praised the bullfighter, suggested on Twitter that he was “drying the bull’s sweat with his handkerchief so that it wouldn’t suffer before he drove a sword through it”.

However, Silvia Barquero, of the PACMA animal rights party, said: “Only a twisted and perverse mind would be capable of torturing an animal until the blood runs down its legs before wiping moisture off its head.”

Journalist and commentator Gerardo Tecé had a similar response. “On top of torturing it, you do the thing with the handkerchief,” he tweeted. “You’re a psychopath, Morante.”

Morante has been a particularly divisive figure in recent months due to his endorsement of the far-right party Vox, which has called for greater support for bullfighting, and his friendship with its leader, Santiago Abascal. In December, threats were daubed on the wall of the bullfighter’s home near Seville accusing him of being a Nazi.

However, both his admirers and detractors appear to be wrong when it comes to his enigmatic gesture in the bullring last week. Experts say that he was neither consoling the bull nor cleaning its face, but rather paying homage to one of his heroes.

Joselito el Gallo, a celebrated matador who died while bullfighting in 1920 and whose career Morante greatly admires, used to dab the bull’s snout with a handkerchief in what was seen as an artistic flourish.

“Neither tears nor sweat,” wrote Antonio Lorca, the bullfighting critic of El País newspaper. “All Morante was doing…was giving a tip of the hat to his idol, in a tribute to a classic way of bullfighting, a detail from another era, an acknowledgement of the greatest bullfighter in history.”

Bullfighting has been facing increasing pressure from animal rights groups. In addition, the industry has been struggling since Spain’s most recent economic crisis started to bite a decade ago. Government figures show that last year, just over 1,500 bullfights were staged, the lowest number since records began in 2003.