Russia and US call for improved relations after Moscow meeting 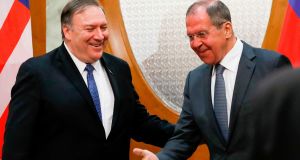 Russia’s foreign minister Sergei Lavrov and US secretary of state Mike Pompeo called for Moscow and Washington to put aside mistrust and build a more constructive relationship as they met in Moscow on Tuesday.

Although the two men sparred over a range of international issues from Ukraine to Venezuela and Iran during talks in the Russian Black Sea resort of Sochi, they agreed it was essential to engage in a professional dialogue and find common grounds for co-operation.

Mr Pompeo’s visit to Sochi marked the first high-level talks between Moscow and Washington since the release of US special counsel Robert Mueller’s redacted report on Russian meddling in the 2016 presidential election. Mr Mueller’s conclusion that there was insufficient evidence to prove Donald Trump’s campaign team colluded with the Kremlin to help him win the White House has removed an obstacle to any improvement in dire relationships between the US and Russia.

Mr Lavrov flatly denied that Russia had interfered in the election after talks with Mr Pompeo on Tuesday, but said he hoped that the completion of the Mueller investigation would cool “passions in the US” and clear the way for the restoration of a “more constructive co-operation” and “professional dialogue between Moscow and Washington”.

“We are sure that this is fully possible and realistic if the matter is handled on the basis of joint respect and takes mutual interests into account,” he said.

Mr Pompeo, who is widely seen as more hawkish on Russia than Mr Trump, told Mr Lavrov that he had come to Sochi because the US president was committed to improving ties with Russia.

“We have differences . . . but it’s not destined that we are adversaries on every issue and I hope we can find places where we have a set of overlapping interests and can truly to begin to build out strong relationships at least on those particular issues,” he said.

The two men clashed over Venezuela, where the US has criticised Russia for propping up the regime of president Nicolás Maduro. Mr Lavrov said it was for the Venezuelan people to decide its future and described US relentless pressure on Mr Maduro as “undemocratic”.

Speaking about the Middle East, Nr Lavrov criticised the US decision to withdraw from an international nuclear pact with Iran and for imposing tough economic sanctions on international companies doing business with the regime in Tehran.

However, he left open space for compromise, saying certain agreements could be reached with Iran with Russian and US co-operation.

Mr Pompeo took a tough line on Ukraine, telling Mr Lavrov that Russia should co-operate with the country’s new president Volodymyr Zelensky and release Ukrainian sailors captured last year after a naval clash in the Kerch Strait off Crimea.

And he warned that there could be no repeat of Russian meddling in the run-up to the next US presidential election next year.

“There are things Russia can do to convey that these types of activities are a thing of the past and I hope they take advantage of that,” he said.

Mr Pompeo visited Sochi the day after Mr Trump announced he would hold talks with Vladimir Putin on the sidelines of the G20 summit in Osaka next month.

Dmitri Peskov, Mr Putin’s spokesman, said on Tuesday that the Russian president had not yet received a formal invitation to talks from his American counterpart. But he welcomed the plan as an opportunity to break the deadlock in Russian-US relations.

“A new stage in relations between Russia and the US would only be possible after talks between the leaders of the two countries,” he said.