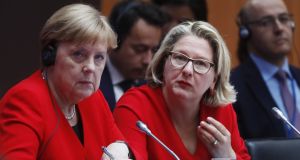 German chancellor Angela Merkel has made a belated effort to win back her “climate chancellor” title, offering qualified backing to French plans for countries to achieve climate neutrality by 2050.

At a conference in Berlin, preparing for this year’s climate conference in Chile, representatives of 35 countries backed a call for the international community to submit revised climate targets and long-term strategies to the United Nations by next year.

After initial scepticism, Dr Merkel appeared to be warming to a proposal for mid-century climate neutrality proposed by French president Emmanuel Macron and backed by eight other governments.

“If we can find a sensible answer then we can join the initiative of the other nine EU member states,” said Dr Merkel. “The discussion should not be about if but rather how we can reach this.”

She reminded delegates that such a climate neutrality agreement would not mean an end to carbon dioxide emissions but additional measures to offset or store CO2.

As Europe’s economic and industrial powerhouse, Germany is struggling to get back on track on climate change. After admitting it will not meet its own 2020 climate targets, it is now focusing on 2030. Dr Merkel has created a new cabinet subgroup, bringing together transport, agriculture and industry ministries under her leadership to adapt government policy.

Priorities include the transition away from fossil fuels such as lignite and towards integrated green mobility policy.

After initial resistance, Dr Merkel has given her conditional approval to a tax on greenhouse gas emissions, calling for a “common, consistent methodology” in Europe. Such a push is unlikely to find agreement at EU level, she suggested, and will depend on a “coalition of the willing” among EU members. Sweden, Switzerland and France already have such a levy while the Netherlands is debating a proposal.

As on other issues, Dr Merkel’s political weight on climate matters is not what it once was. Members of her ruling Christian Democratic Union (CDU) are divided on new climate proposals and new party leader Annegret Kramp-Karrenbauer has sent mixed signals on a CO2 levy.

The CDU leader and her predecessor are against any additional CO2 burden to commuters and others they think can least afford it.

That has infuriated the opposition Green Party, which has accused the chancellor of going soft on any climate measures that put pressure on industry. Dr Merkel’s Social Democratic (SPD) coalition partner has pushed for a more energetic climate response. At Berlin’s so-called Petersberg Climate Dialogue, SPD federal environment minister Svenja Schulze called for a renewed push on renewable energy in Germany “without the handbrake on”.

Germany is working towards a far-reaching energy transition, taking its last nuclear plant offline by the end of 2022 with plans to be coal-free by 2038.

Greenpeace International executive director Jennifer Morgan has called on Germany to “take on leadership again instead of belonging to the shameful group in the EU that block”.

Greenpeace has welcomed Mr Macron’s proposals but suggested they should be in place a decade earlier, in 2040.