Brexit: May to bring withdrawal Bill forward in early June 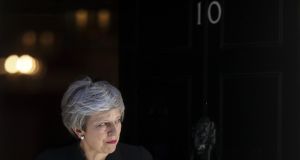 Theresa May will bring forward the Withdrawal Agreement Bill in the week beginning June 3rd, with a view to passing all its stages before the summer recess in late July, regardless of the outcome of talks with Labour. Mrs May and Jeremy Corbyn met on Tuesday evening and agreed to continue talks aimed at finding a common position on Brexit despite disquiet over the negotiations among MPs in both parties.

“This evening the prime minister met the leader of the opposition in the House of Commons to make clear our determination to bring the talks to a conclusion and deliver on the referendum result to leave the EU,” a Downing Street spokesman said. “We will therefore be bringing forward the Withdrawal Agreement Bill in the week beginning June 3rd. It is imperative we do so then if the UK is to leave the EU before the summer parliamentary recess. Talks this evening between the prime minister and the leader of the opposition were both useful and constructive.”

Ministers discussed the talks with Labour for more than two hours at an extended cabinet meeting on Tuesday before agreeing to continue the negotiations. Before the meeting they read a document outlining the progress made in the talks during the past six weeks.

“Ministers involved in the negotiations set out details of the compromises which the government was prepared to consider in order to secure an agreement which would allow the UK to leave the EU with a deal as soon as possible,” the prime minister’s official spokesman said.

Fourteen senior Conservatives, including former ministers Boris Johnson and Dominic Raab and 1922 Committee chairman Graham Brady, warned the prime minister on Tuesday against agreeing to Labour’s demand for a permanent customs union. Former defence secretary Michael Fallon, who also signed the letter, said it would be better to remain in the EU than to sign up to a customs union and called on Mrs May to end the talks with Labour.

“We said we would leave a customs union very clearly at the time of the election. If you go into a customs union you can’t start pursuing independent trade deals,” Mr Fallon told the BBC.

“Far better to start concentrating on the other side, which is the arrangements in Northern Ireland. The talks are clearly not getting anywhere.”

Labour shadow chancellor John McDonnell said there had been no “significant shift” in the government’s position during the talks, which were “not near what we want”. He said the fact that some of the leading contenders to succeed Mrs May had signed the letter denouncing the customs union made it more difficult for Labour to sign up to any deal with the government.

“Our big problem now is if we’re going to march our troops in parliament to the top of the hill to vote for a deal, and then that’s overturned, literally, in weeks, I think that would be a cataclysmic act of bad faith,” he said.

1 Love in a time of Covid: John and Mary marry over 40 years after first meeting
2 Sinn Féin’s stand on Covid is facing increasing questions from political rivals
3 Cab investigates behind the massive gates of Chosen Few Motorcycle Club in Dublin
4 Big Phil is being very big about his former boss’s Covid quarantine trip
5 Two hundred Irish retailers for all your online Christmas shopping
Real news has value SUBSCRIBE