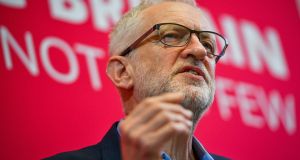 If the British prime minister and Jeremy Corbyn, above, cannot agree on a common position, the government’s Plan B is to seek Labour’s engagement with a process of ‘definitive votes’. Photograph: Ben Birchall/PA Wire

Theresa May’s announcement last night that she will introduce the Withdrawal Agreement Bill (WAB) early next month comes despite no evidence of progress in talks between her government and Labour.

The prime minister agreed with Jeremy Corbyn last night to continue the talks but the results of next week’s European Parliament elections are likely to make an agreement more difficult to achieve.

Nigel Farage’s Brexit Party is on course to swallow up most of the traditional Conservative vote and a catastrophic result will stiffen the spine of Tory Brexiteers in resisting compromise. Labour is losing support to the Liberal Democrats and Greens, both of which are clearly committed to a second referendum on Brexit, a position favoured by many Labour MPs but not fully endorsed by the party leadership. Labour MPs, especially in London and the southeast, will be more reluctant than ever after the elections to vote for any deal that does not include a confirmatory referendum.

If the two sides cannot agree on a common position, the government’s Plan B is to seek Labour’s engagement with a process of “definitive votes”. This would see a number of Brexit options put to an exhaustive vote under the Alternative Vote (AV) or Single Transferable Vote (STV). There is little reason to believe, however, that any option to emerge as the winner from such a process could command a majority in the House of Commons.

1922 Committee chairman Graham Brady is planning to table an amendment to the WAB that would put into British law a commitment to ensure that “alternative arrangements” for the Border are in place before Britain’s post-Brexit transition period ends. Under the proposal, the Northern Ireland backstop would remain part of the withdrawal agreement but the alternative arrangements would ensure that it is never activated.

Brussels and Dublin are sceptical but senior EU and Irish sources acknowledge privately that if the wording of Brady’s amendment does not contradict any commitment Britain makes in the withdrawal agreement, it would not be seen as an act of bad faith or non-ratification of the agreement.

The prime minister’s announcement of a timetable for the WAB, which she says must pass all its stages before the summer recess in late July, comes two days before she is due to meet the executive of the backbench 1922 Committee. The backbenchers want her to outline a timetable for her own departure from Downing Street and the legislative plan for the WAB could offer a blueprint.