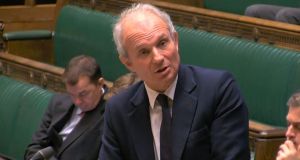 David Lidington said he hoped the Brexit deal could be ratified before British MEPs would have to take their seats in Strasbourg on July 2nd. Photograph: PA Wire

David Lidington’s admission that Britain will be unable to avoid taking part in this month’s European Parliament elections came as no surprise. But his suggestion that the government could miss the next deadline for ratifying the withdrawal agreement will cause alarm among Conservative MPs.

Lidington, who is prime minister Theresa May’s de facto deputy, said he hoped the Brexit deal could be ratified before British MEPs would have to take their seats in Strasbourg on July 2nd. But he added that the government certainly wanted “to get this done and dusted by the summer recess” towards the end of July.

At the March summit in Brussels when European Union leaders agreed to extend Britain’s membership until October 31st, they said Brexit could happen before then if the withdrawal agreement was ratified. Under the terms of the extension, Britain would leave on the first day of the month following its ratification of the Brexit deal.

May promised MPs after the March summit that, although she is immune from a challenge to her leadership of the Conservative party until next December, she would resign as soon as the withdrawal agreement is ratified, leaving the next stage of the Brexit negotiations to her successor.

Graham Brady, the chairman of the 1922 Committee of Conservative backbenchers, met the prime minister on Tuesday evening seeking a clear timetable for her departure. Backbenchers have warned that they will change the rules to allow a vote of confidence in May’s leadership next month unless she promises to leave within weeks.

The prospect of talks with Labour dragging out for weeks so that the Brexit deal is not ratified until mid-July is especially unwelcome to those Tory MPs who want to prevent a no-deal Brexiteer such as Boris Johnson or Dominic Raab from becoming prime minister. For Remainers and moderate Brexiteers, a swift resolution of Brexit, even if it means making an unpalatable deal with Jeremy Corbyn, is the best way to avoid a lurch to the right for their party.

With Brexit resolved, the leadership contest could avoid offering a straight choice between May’s deal and the hard Brexiteers’ promise to leave without a deal unless the EU agrees to reopen the withdrawal agreement. Lidington’s remarks on Tuesday suggest that the prime minister is preparing to dig in for another few months, perhaps until the autumn – a timetable that would test the patience of even her most indulgent backbenchers.