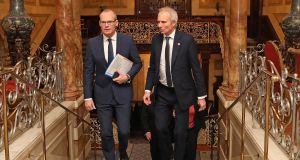 Simon Coveney and David Lidington will sign the agreement in London on Wednesday ahead of a meeting of the British-Irish Intergovernmental Council. Photograph: Julien Behal

The British and Irish governments will on Wednesday sign a deal to guarantee that rights offered by the Common Travel Area (CTA) will continue after the United Kingdom quits the European Union.

The Memorandum of Understanding between Dublin and London will copperfasten the free movement of people between Britain and Ireland, but also access to social security, health and education.

The CTA has been in place since the 1920s; its provisions are found in disparate pieces of legislation and bilateral administrative agreements.

Wednesday’s agreement follows two years of work involving government departments in both countries to ensure that, even if Britain leaves the European Union without a deal, citizens will continue to enjoy their current reciprocal rights and privileges.

The two governments have agreed to maintain existing arrangements on social insurance, child benefit and pensions and they are working on new arrangements to ensure that British and Irish citizens will continue to have equal access to public health and education services in both countries.

Tánaiste Simon Coveney and cabinet office minister David Lidington, Theresa May’s de facto deputy, will sign the agreement in London ahead of a meeting of the British-Irish Intergovernmental Council. Mr Coveney and Mr Lidington are also expected to discuss Brexit as talks continue between the British government and Labour in an effort to reach a compromise that would enable the withdrawal agreement to be ratified.

1 Parents jailed over female genital mutilation of daughter
2 Border on Brexit: ‘Europe will look after Northern Ireland’s interests’
3 Gardaí may have to wait days to interview mother of McGinley children
4 No obvious signs of injury on remains of McGinley children
5 Election 2020: Party leaders clash on multiple issues in TV debate
Real news has value SUBSCRIBE