UK government’s talks with Labour described as ‘constructive’ and ‘robust’ 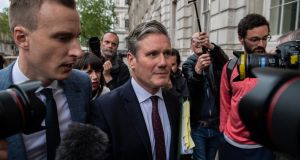 Conservative and Labour negotiators will meet again on Wednesday after “constructive and detailed” talks on Tuesday evening aimed at resolving the impasse over Brexit at Westminster. But the UK government acknowledged that it was now too late to avoid contesting European Parliament elections later this month.

The negotiations on Tuesday were led by cabinet secretary David Lidington, Theresa May’s de facto deputy, and Labour’s shadow Brexit secretary, Keir Starmer. The talks are focused on finding a common position on issues including customs arrangements and employment and environmental rights that would enable Labour to support the withdrawal agreement.

“Today’s meeting was constructive and detailed. The teams have agreed to meet again for follow-up talks tomorrow afternoon, recognising the need to resolve the current Brexit deadlock in parliament,” a Downing Street spokesman said.

Labour’s shadow business secretary, Rebecca Long-Bailey, described the talks as “robust” but said the government had yet to compromise on its red lines. She added that although it was difficult to see how an agreement could be reached unless the government compromised, Labour believed it was worth persisting with the talks.

“We want to resolve this issue for all of our constituencies, whether they were Leave seats or Remain seats, and there certainly is, from my perception of the meetings that we have had so far, a willingness on both sides to move towards some kind of consensus and we certainly need to try,” she said.

The government had hoped the talks with Labour would mean that the Brexit deal would be ratified in time to avoid having to participate in European Parliament elections on May 23rd. But Mr Lidington said on Tuesday that it was now inevitable that Britain would take part in the elections.

“We very much hoped that we would be able to get our exit sorted and have the treaty concluded so that those elections did not have to take place. But legally, they do have to take place – unless our withdrawal has been given legal effect – so those will now go ahead,” he said.

“But we will be redoubling our efforts and talks with MPs of all parties to try to make sure that the delay after that is as short as possible. Ideally we’d like to be in a situation where those MEPs never actually have to take their seat at European Parliament, certainly to get this done and dusted by the summer recess.”

If the Brexit process is completed by June 30th, the UK’s MEPs elected on May 23rd will not have to take their seats in Strasbourg, where the new parliament meets on July 2nd. If the deal is ratified after that but before the parliamentary recess in late July, the MEPs would take their seats for a few weeks and the UK would leave the EU on August 1st.

Mrs May on Tuesday evening met Graham Brady, chairman of the 1922 Committee of Conservative backbenchers, who was due to ask her to outline a timetable for her resignation. Neither side made any comment immediately after the meeting.