White House in tug of war with Democrats over Mueller documents 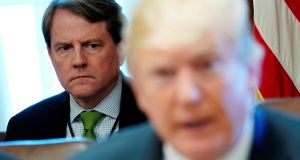 The Trump administration moved to block former White House counsel Don McGahn from handing over sensitive documents to Congress as the battle between president Donald Trump and House of Representatives Democrats over the Mueller report continued on Tuesday.

In a letter to the House judiciary committee, current White House counsel Pat Cipollone said that Mr McGahn cannot be compelled to comply with a subpoena demanding 36 types of documents, most of which related to the Mueller investigation.

Democrats had been hoping to call Mr McGahn to testify before Congress. The conservative lawyer, who served as the White House chief counsel from the start of Mr Trump’s presidency to October 2018, emerged as a key figure in special counsel Robert Mueller’s report on Russian electoral interference in 2016. According to the report, Mr McGahn was asked twice by Mr Trump during the summer of 2017 to have Mr Mueller removed.

But Mr Trump has vowed to block all subpoenas related to the Mueller report, setting up a constitutional battle with House Democrats who argue that Congress has significant oversight rights over the executive branch.

While Mr Mueller found in his report that there was no collusion between the Trump campaign and the Russian government in the run-up to the 2016 election, he stopped short of exonerating the president on obstruction of justice charges, arguing that the issue was beyond the scope of his investigation.

In his first public comments since the redacted version of Mr Mueller’s 448-page report was published last month, Senate majority leader Mitch McConnell told the US Senate on Tuesday that the Mueller probe was now “closed”, calling on the country to move on. In lengthy comments, the most senior Republican in the Senate accused Democrats and the national media of “grieving . . . that the national crisis they have spent two years wishing for did not materialise”.

Democrats had suffered a “meltdown” over the report’s findings, he said, and have shown an inability to accept the “bottom-line conclusion” that members of the Trump team did not collude with Russia’s efforts to influence the 2016 presidential election.

We took an oath to protect and serve the constitution of the United States of America, and the way we do that is we begin impeachment proceedings now against this president

“The special counsel report laid out 11 instances of the president’s obstruction, and left a raft of unanswered questions about co-ordination between the president’s campaign and Russia. These are not trivial or political questions – they go to the wellspring of our democracy,” they said.

Presidential candidate Elizabeth Warren, who spoke shortly after Mr McConnell on the Senate floor, also dismissed his comments, calling for impeachment. “We took an oath to protect and serve the constitution of the United States of America, and the way we do that is we begin impeachment proceedings now against this president.”

Meanwhile, officials from the department of justice were scheduled to meet with members of the House judiciary committee on Tuesday ahead of a scheduled vote by the committee on Wednesday on whether to hold attorney general William Barr in contempt of Congress.

The committee began contempt proceedings against the attorney general on Monday, over his failure to comply with a subpoena to provide documents related to the Mueller report. If the committee votes to hold Mr Barr in contempt, a full vote in the House of Representatives would then be scheduled.

The controversy over Mr Barr’s obligations to Congress as attorney general took place a day after the treasury secretary refused to hand over Mr Trump’s tax records to the ways and means committee.