EU should have countered Brexit lies ahead of vote, says Juncker 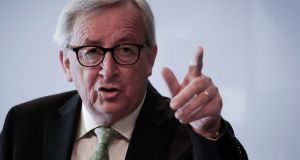 When EU leaders meet in Sibiu, Romania, on Thursday, their gathering on Europe Day will also symbolically mark 15 years since the EU’s biggest enlargement and the reconciliation of its postwar historic divisions, Jean-Claude Juncker said on Tuesday.

The European Commission president told journalists in Brussels that the informal leaders’ meeting, just weeks before the European Parliament elections, had to send a message that, despite Brexit, the EU is determined to work together to face the challenges its members face.

“We must embrace and prepare for change together,” he said, setting out the commission’s 10 priorities for action, ranging from completion of economic and monetary union and a massive investment programme to a socially and environmentally sustainable Europe.

Emphasising the need for the next commission to do like his own, “less but better”, he insisted “we can do nothing if we try to do everything”. The Juncker commission cut the legislative programme by three-quarters but proposed and got through some 348 pieces of legislation, 90 per cent of them with unanimous support from member states.

Mr Juncker was asked what he was most proud of and what his biggest regrets were. He cited his slow response to the Lux Leaks tax scandal and added that “it was a mistake not to intervene or interfere” in the UK’s Brexit referendum, after then prime minister David Cameron asked him not to campaign for a Remain vote.

“We would have been the only ones to destroy the lies circulated. I was wrong to be silent at such an important moment ... It was a mistake to listen so carefully to Cameron. He asked me not to intervene,” said Mr Juncker.

In order to better project a coherent union on the international stage, the EU needs to move to greater use of majority voting in key areas, Mr Juncker said. That could be done, he said, “if the political will is there, without reopening the treaties” – a rebuff to Austrian chancellor Sebastian Kurtz, who will suggest a number of treaty changes. The prospect of referendums in several member states fills many leaders with terror.

Although not on their formal agenda, the leaders are also expected to begin discussions about the top EU jobs, which have to be shared out in the next few months. European Council president Donald Tusk will be taking initial soundings. A senior EU official involved in planning the summit warned on Tuesday that the process was hugely complex – the last time, in 2014, it took three summits to resolve.

Mr Tusk is expected to start the process by convening a leaders’ dinner and postmortem immediately after the European elections on May 28th to assess the new political balance of forces.

At stake are the presidencies of the commission, council, European Central Bank, and the high representative for foreign and security policy. The divvying-up by leaders will require a careful balancing of regional, political affiliations and gender numbers.

Weighed in the mix will also be consideration of the nationalities and affiliations of senior commission job holders, such as secretary general Martyn Selmayr, and the replacement of Italy’s Antonio Tajani as president of the European Parliament.

Mr Tusk will set out out the parameters of the process and remind leaders that they have already made clear to MEPs they will not necessarily adhere to the spitzenkanditat system that the latter have devised to leverage control of the nomination process for the European Commission presidency.

Parliament has warned that unless the candidate with strongest parliamentary support after the elections is approved by leaders, it may refuse to ratify their choice.

Mr Tusk will remind leaders that the treaty provides for an “autonomous competence of the European Council to nominate” the commission president, after consultations with MEPs. Several leaders are reportedly very unhappy at having their hands tied by MEPs, and several potential candidates, such as Brexit negotiator Michel Barnier, have not submitted themselves to their parties for support as spitzenkandidat.

There is potential for a major clash between the parliament and leaders over the issue. Asked by journalists if he still stood by the spitzenkandidat system, Mr Juncker was defiant: “They [EU leaders] tried to [ignore it] last time. They will not succeed next time.”

That was interpreted by one French journalist as a clear Juncker endorsement of his European People’s Party colleague and spitzenkandidat Manfred Weber, at the expense of Mr Barnier.

Making his own task somewhat easier, however, Mr Tusk will also remind leaders that their decision on the nominations, like the last time, may be taken by qualified majority – no one has a veto.