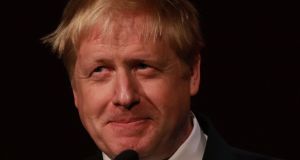 The allegation relates to the much-trumpeted claim by the Vote Leave campaign that the UK sends £350 million a week to the European Union, which was found to be misleading by the UK Statistics Authority. Photograph: Nick Bradshaw/The Irish Times

A crowdfunded legal case against Boris Johnson for allegedly abusing public trust during the EU referendum campaign is to receive a hearing in court later this month.

Private prosecutor Marcus Ball alleges that the former foreign secretary committed three offences of misconduct in public office by endorsing and making statements, which he knew to be false at a time when he was mayor of London and an MP.

The allegation relates to the much-trumpeted claim by the Vote Leave campaign that the UK sends £350 million a week to the European Union, which was found to be misleading by the UK Statistics Authority.

Mr Ball said: “This case is a world first, it has never happened before. A Member of Parliament has never been prosecuted for misconduct in public office based upon alleged lying to the public.

“My backers and I aspire to set a precedent in the UK common law making it illegal for an elected representative to lie to the public about financial matters.”

The private prosecution is due to receive an initial hearing behind closed doors at Westminster Magistrates’ Court on May 14th.

It is not known whether the case will proceed to trial.

Mr Ball has raised more than £370,000 in crowdfunding campaigns to finance the case.–PA