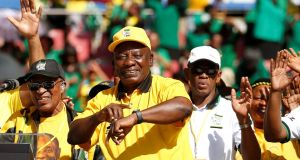 South Africans will cast their ballots in a general election on Wednesday that could see the ruling African National Congress (ANC) party’s support fall below 60 per cent of the national vote for the first time.

The former liberation movement’s popularity among the electorate has been on the wane since the scandal-prone former ANC leader Jacob Zuma started his first stint as South Africa’s president in 2009.

In February 2018, the ANC recalled Mr Zuma – who was accused of widespread corruption, maladministration and incompetence during his tenure – during his second term and replaced him with new party leader Cyril Ramaphosa.

In the following 16 months Mr Ramaphosa urged voters to stick with the ANC on polling day, saying his administration would clean up the ruling party, fight public sector corruption, grow the economy and create jobs if returned to power.

However, a number of political observers believe Mr Ramaphosa ’s pleas to give the ANC another chance will be ignored by many people who traditionally voted for the party that was at the forefront of ending white minority rule.

The Institute for Race Relations’ (IRR) last voter survey, which was released on Monday, points to the ANC winning the national poll with just 53 per cent of the vote on a 70 per cent voter turnout. That would leave the party down by more than nine percentage points on the party’s 2014 showing of 62.15 per cent.

The poll also suggests the main opposition Democratic Alliance (DA) will grow its support only slightly to 24 per cent of the vote, up from 22.23 per cent in 2014.

The big winners, according to the IRR, will be Julius Malema’s radical left-wing Economic Freedom Fighters, which will more than double its support from 6.35 per cent five years ago to 14 per cent this time round.

In addition, the IRR poll suggests the ANC could lose complete control of Gauteng province, which could usher in an era of coalition governance in South Africa’s economic heartland.

The ANC is also under threat in KwaZulu-Natal and the North West provinces, while the DA is expected to retain control over the Western Cape.

A second survey released on Tuesday by pollsters Ipsos points to the ANC winning the parliamentary poll with 61 per cent of the ballots, on a 71 per cent voter turnout. Its results also suggest the DA will retain its position as the main opposition party.

A spike in protests about public services in the months running up to the election had prompted concerns for public safety at polling stations, but on Tuesday the Independent Electoral Commission’s Sy Mamabolo said the body was “encouraged” by a reduction in such incidents in recent weeks.

Nevertheless, the South African National Defence Force has confirmed it will deploy troops to keep the peace in potential hotspots in KwaZulu-Natal, which has witnessed dozens of political killings recently, and the North West, where thousands of voters are threatening an election boycott.

Some 26.7 million people are registered to vote at 22,924 polling stations across the country on Wednesday, in what will be South Africa’s sixth general election since the end of apartheid in 1994.