Brexit Proof Q&A: ‘We are about as ready as we can be given the continued uncertainty ’ 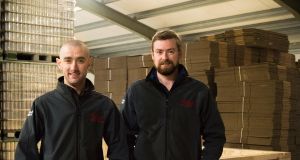 Darren Fenton and Ciarán Gorman of Bevcraft: “We’ve taken a ‘two-pronged’ approach of opening in the UK and, at the same time, pursuing international market opportunities.”

I was quite shocked at first as, from the outset, it looked like an economic own-goal. I think here in Ireland it is only since the referendum that we’ve come to appreciate how well our economy has adapted to globalisation and EU membership. Many parts of the UK, particularly older manufacturing areas, have had a much less positive experience and be it right or wrong, when given the choice, Brexit made sense to many people.

We are located [in Mullingar] as close to Belfast as we are to Cork. From day one, we’ve provided a 32-county mobile canning service [to the craft brewing sector], with our teams regularly operating in Northern Ireland. Any form of tariff, customs or divergence in regulation will have an adverse impact on turnover of over €1 million this year.

How much do you rely on raw materials or markets north of the Border? How much on Britain?

Our raw material (aluminium) is an international commodity traded in US dollars which is then formed into cans in Carlisle and Leicester in England before being exported to Ireland in sterling.

This puts the material at risk of tariffs and currency volatility both on its import into the UK and its onward export to Ireland. In 2019, we will process over 3.5 million cans which physically means we need a full 40-foot truck delivery across the Irish Sea every single week. On the positive side, tariff levels on aluminium are not high.

When did you begin preparing for Brexit and what contingency plans have you put in place so far ?

Our very first production run was on June 30th, 2016, just a week after the referendum, so the concept of Brexit has been hardwired into every decision we’ve made since.

Our Brexit strategy is very much to meet the challenge head-on. To do this, we’ve incorporated a UK subsidiary company and opened a full UK warehouse and office facility to allow us to buffer our stock holding in both jurisdictions.

We were one of the very first mobile canners in Europe which has given us a great platform to grow the business internationally. We have four customised mobile canning lines which can be rolled into a van and transported to a different brewery location each day along with everything needed to convert a tank of beer into pallets of ready-to-sell 24-pack of cans. We look after everything from sourcing the cans, branding them with a label or shrink sleeve, date coding them, storing them, transporting them, bringing all the necessary labour, equipment, material and testing instruments to site.

Prior to this, craft breweries would have had to make a very large (over €250,000) investment to offer a canned product. Now they can use us as and when they want with no capital, stocking, staffing or equipment needed. We have invested over €1 million in the business over the last three years to diversify our service and increase capacity. Under our Packsource brand we have already secured export orders to the UK, Norway and Switzerland.

Absolutely yes. The traditional route for Irish businesses has been to expand into Northern Ireland and then slowly into the rest of the UK. Brexit has turned that tried and tested formula on its head, so we’ve taken a “two-pronged” approach of opening in the UK and, at the same time, pursuing international market opportunities wherever we can commercially serve them from Ireland.

When do you expect to be Brexit ready?

We have prepared from the outset for a hard Brexit and the addition of our UK warehouse is the final piece in that jigsaw. We are about as ready as we can be given the continued uncertainty of what shape Brexit will take.

Best case scenario is that Brexit doesn’t proceed at all. Worst case scenario is divergence in technical standards. The specification of cans used in France and the UK has, until recently, been different. Our industry in both Ireland and Britain has been working on converging to the French standard. If the UK stops this convergence process, we’d have to double our stock holdings overnight.

Yes. We are holding more than double the level of stock we held a year ago.

How might the Irish or British governments, and the EU, help ease the pain of Brexit for your company or sector?

Avoiding a crash out scenario is the single most important thing they can do and, failing that, putting in place transition support schemes to ease the immediate VAT and customs and cashflow impact of a hard Brexit.

How do you think the Irish/British governments have handled the Brexit negotiations?

I think the Irish side has performed well in representing our interests, however it has to be said that doing so would have been impossible without the solidarity our EU member states have shown. In contrast, the British approach has clearly not delivered a form of Brexit even remotely close to what was campaigned for.

In five years’ time how will business have changed as a result of Brexit?

Ultimately life goes on. When the immediate impact of Brexit has passed I think the main long-term impact will have been to push Irish businesses harder than ever before to seek out new international market opportunities which, after all the pain of Brexit, will be a good thing.