Yemen knocked back 20 years by ravages of war, UN claims

‘Human development has not just been interrupted. It has been reversed’ 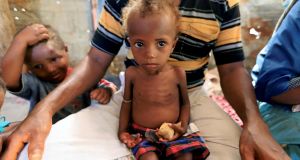 The deadly and devastating war in Yemen has set back development by 20 years in the poorest country in the Arab world, according to a UN report.

The report issuedby the UN Development Programme (UNDP) predicts that if the war ends this year there will have been 233,000 Yemeni deaths, 140,000 of them children under the age of five. Losses in economic output for this year alone will amount to $89 million (€80 million) and will double if the war continues through to 2022.

“Human development has not just been interrupted. It has been reversed,” said UNDP Yemen representative Auke Lootsma. “Even if there were to be peace tomorrow it could take decades for Yemen to return to pre-conflict levels of development.”

The report warns, “The long-term impacts of the conflict are vast and place it among the most destructive conflicts since the end of the cold war.”

Continuation of the conflict “will add significantly to prolonged human suffering, retard human development in Yemen, and could further deteriorate regional stability”, it states.

If the conflict continues until 2022, the projected number of fatalities will be 482,000. The predictions get worse: by 2030, 1.8 million Yemenis could die, 1.5 million of them children. Most will not die from warfare but from the lack of food and healthcare. The country’s population stands at 28 million, with 80 per cent relying on international humanitarian aid to survive.

The crisis in Yemen began in 2014 with a revolt by northern Houthi tribesmen against the interim government in Sana’a installed following an 2011 Arab Spring uprising that ousted veteran president Ali Abdullah Saleh.

After the western-backed Saudi-led military coalition intervened in March 2015, the conflict escalated and expanded, dividing the country. The Houthis hold the capital, Sana’a, and most populated areas. The Saudis and Emirates control Aden port and the south.

While UN agencies have repeatedly warned of the humanitarian consequences of the war, the report exposes the existential challenges Yemen faces if emergency aid is not funded and the war does not end soon.

As cholera cases surge, humanitarian agencies say only small amounts have been paid of the $4 billion pledged by foreign donors. Although responsible for most Yemeni deaths and devastation, Saudi Arabia and the Emirates have been releasing only small sums in instalments of the $1.5 billion they have committed to relief.

Prospects for Yemen are poor. UN-mediated talks to demilitarise Hodeidah port, through which 80 per cent of imports flow, remain stalled. The US Senate failed on Thursday to muster a two-thirds vote needed to override President Donald Trump’s veto of a bipartisan Bill that would have compelled him to secure congressional approval before the US military could boost Saudi Arabia’s war effort.

By backing the war, the US gives the Saudis and Emiratis justification for continuing the campaign.

Legislators in both houses have vowed to not only end US involvement with the Saudis in the Yemen campaign but also to compel the administration to put pressure on Riyadh to halt domestic repression. While pointing to an image of an emaciated Yemeni child, Democratic senator Chris Murphy said “the United States should never willingly be a part of a bombing campaign that results in this kind of starvation”.