UK election: Quotes of the night

‘MPs need to ... realise the conversations they have in London are a million miles away from reality’ 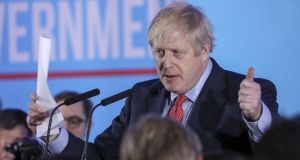 “It does look as though this One Nation Conservative government has been given a powerful new mandate to get Brexit done” – Boris Johnson said. Photographer: Chris Ratcliffe/Bloomberg

Here are some of the best quotes from the UK general election results night so far:

“It does look as though this One Nation Conservative government has been given a powerful new mandate to get Brexit done” – Boris Johnson said.

“We politicians have squandered the last three years, three and a half years in squabbles – we’ve even been arguing about arguing, and arguing about the tone of our arguments. I will put an end to all that nonsense and we will get Brexit done on time by the January 31st” – Boris Johnson in a victory speech on Friday morning.

“This is obviously a very disappointing night for the Labour Party with the result that we’ve got” – Jeremy Corbyn.

“Let me say now, for millions of people in our country these results will bring dread and dismay and people are looking for hope” – Liberal Democrat Jo Swinson who lost her Dumbartonshire East seat to the SNP.

“Corbyn was a disaster on the doorstep. Everyone knew that he couldn’t lead the working class out of a paper bag” – Former Labour Home Secretary Alan Johnson.

“This is not a time for easy answers, as much as I wish it was, I wish there was some silver bullet but I also wish I was a size 10” – Labour’s Jess Phillips.

“My view is a simple view and that is that you cannot ignore democracy. You can try and push it away if you wish but the people in the North, the people who I associate myself with on a daily basis, are very much aggrieved” – Labour Party chairman Ian Lavery who held the Wansbeck seat.

“We set out to make the Conservative party conservative again and I think it’s job done. Well done to Boris” – Arron Banks, the co-founder of the Leave.EU campaign.

“MPs need to reflect, the media needs to reflect and they need to realise that the conversations they have in London are a million miles away from reality” –Boris Johnson’s aide Dominic Cummings.

“Well, whatever majority Boris has there will be an onus on him to deliver on no (border) checks east-west and an even bigger issue on how does he preside over the UK, Scotland, England, Wales and Northern Ireland, and how does he cement that and build that for the future?” – The DUP’s Gregory Campbell.

“My view is a big majority means that the influence of the ERG, the influence of those who are committed Eurosceptics, becomes a lot weaker and I would expect, I’ll predict, by July 1st we will be extending the transition period out until 2022” — Brexit Party Leader Nigel Farage.

“I think there is no way that we are going to get a comprehensive free-trade agreement before the end of 2020. ”Now the prime minister has made it clear, I think he’s boxed himself in, the manifesto is absolutely explicit about this, that he will not extend the implementation period.

“I remain concerned that we will ultimately leave the European Union on no-deal terms or something very close to that” – Former Tory justice secretary David Gauke who lost the Tory whip after supporting efforts in Parliament to block a no-deal Brexit and failed to hold his South West Hertfordshire seat as an independent.

“Congratulations to Boris Johnson on his great WIN! Britain and the United States will now be free to strike a massive new Trade Deal after BREXIT. This deal has the potential to be far bigger and more lucrative than any deal that could be made with the EU Celebrate Boris!” – US president Donald Trump in a tweet.

“In the weeks ahead we will elect a new leader and our party will continue to be the rallying point for anyone who believes in a country where everyone has the chance to get on in life” – Baroness Sal Brinton who has become the joint acting leader of the Liberal Democrats following Jo Swinson’s defeat. –PA