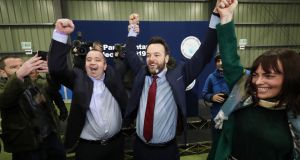 In Foyle, the expectation was that it would be a close-run thing; in the end, Colum Eastwood ran away with it.

The SDLP leader defeated the outgoing MP, Sinn Féin’s Elisha McCallion, by more than 17,000 votes, taking 57 per cent of the vote; cheers from Eastwood’s party colleagues as they held his arms aloft in victory said it all.

Derry, it has often been said, is the SDLP’s stronghold. This is the city of John Hume and Mark Durkan; between them the pair held the seat from 1983 until Durkan’s defeat in 2017, when the loss of the constituency to Sinn Féin by a mere 169 votes prompted much speculation about the party’s future viability at the ballot box.

In the early hours of this morning those questions were emphatically answered. The final result was Eastwood’s 26,881 votes to McCallion’s 9,771. This time around the comparisons were with Hume; Eastwood’s victory, it was whispered around the count centre, had not just equalled but surpassed those of Hume.

Durkan was there too, standing side by side with Eastwood; in 2017, he recalled, “I said at the time that it hurt. It’s a delight to be here tonight to see Colum win this seat handsomely.”

But the victory was, he stressed, not about Eastwood or the SDLP. “People in the city have realised they have lost representation... They had no voice at Westminster when key decisions were being made, so this is a voice for representation.”

It would seem that this made the difference. Eastwood fought the election on a clear message of “Stop Boris, Stop Brexit”. The SDLP, he promised, would take their seats at Westminster; in the language of Eastwood’s campaign literature, the party would “turn up for you.”

In this Border constituency that returned one of the highest Remain votes in the UK in the Brexit referendum of 2016, this message clearly resonated not just with SDLP voters but also with Remainers across the spectrum.

Afterwards McCallion acknowledged her disappointment and said the party would look at the result. “We’ll be analysing over the next few days as to what has happened,” she said afterwards. “It’s unclear at this stage, but clearly Colum put out his pitch; people came out in large numbers for that; we can’t fudge.

“It’s obvious people want representation,” she said, adding that she believed “that’s not necessarily equated to representation in Westminster”, which she felt people had mixed up with their desire for representation at Stormont.

For Eastwood there was no such confusion. The people of Derry, he said, had “roared” a very clear message to politicians. “This could be a story about the revival of the SDLP,” he said, “but it has to be a story about getting back to work.”

With talks aimed at restoring the Northern Ireland Assembly to resume on Monday, there is much work to be done. “We heard you loud and clear,” Eastwood told his voters during his acceptance speech. They will be watching to make sure he delivers.

They will be watching, too, to see just how much of an impact the SDLP will have when its MPs turn up at Westminster, not least in light of the UK-wide result.

Nearer to home, he said, politicians “have to get back to work in Stormont and get people back round the table and sort this out,” and he appeared to hold out the prospect of rapid progress. There is, he said, “no good reason why this can’t be done before Christmas”.