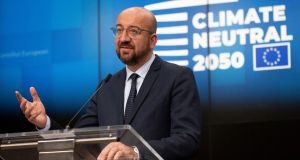 European Council president Charles Michel: ‘We have a way of working in order to guarantee the unity of the European countries, to guarantee the transparency and to try to keep a close co-operation with the United Kingdom.’ Photograph: Virginia Mayo/AP Photo

Leaders of the EU27 on Friday gave the go-ahead to European Council president Charles Michel to rapidly prepare a negotiating mandate for talks on the post-Brexit future relationship with the UK.

Speaking at the summit in Brussels, Mr Michel said EU leaders were “ready for the next steps”. He emphasised that the talks would, as the summit conclusions insist, “ensure a level playing field”, code for regulatory alignment or tariffs to compensate for divergence. They will start as soon as the UK leaves the union.

The decisive result means that the UK will certainly leave on January 31st, a certainty that will bring considerable quiet relief in many capitals for whom regret at Brexit has increasingly been tinged by a desire to move on.

There is concern, however, that the prospect of a cliff-edge no-deal Brexit remains a prospect for the end of the UK transition period in December 2020. There is little hope that there is sufficient time in 11 months to negotiate more than a bare-bones trade agreement between the EU and the UK with the necessity of hard customs borders looming large.

Crucially, EU officials worry at the repeated insistence by UK prime minister Boris Johnson that he will not seek any extension to transition by the treaty-defined deadline of the end of June. Some are asking whether the EU itself could make the request.

I would like to congratulate @BorisJohnson on his victory.

We expect a vote on the withdrawal agreement as soon as possible. #EU is ready for the next phase. We will negotiate a future trade deal which ensures a true level playing field.

During transition, although the UK will be outside the EU, the old rules remain in place, but the UK will not retain its vote in the decision-making of the union.

The EU summit stressed the desire to maintain as close as possible a relationship with the UK and confirmed the appointment of Brexit chief negotiator Michel Barnier in a new role of co-ordinating talks on the future relationship across a wide range of fields from trade to security.

“We are ready for the next steps,” Mr Michel said as the results came in.

“We will see if it is possible for the British parliament to accept the withdrawal agreement, and to take a decision,” he added. “And if it is the case, we are ready for the next steps. We have a way of working in order to guarantee the unity of the European countries, to guarantee the transparency and to try to keep a close co-operation with the United Kingdom. ”

He emphasised that the European Council conclusions saw the issue of maintaining a “level playing field” as of key importance.

The warning to Mr Johnson from the leaders is clear: every step away from future regulatory alignment of the two economies, every attempt to gain competitive advantage for British goods, will be reflected, as Mr Barnier has repeated, in proportionate tariff barriers. A free trade agreement will allow free trade at a price – the EU will be no pushover. And it will take time.

EU sources emphasise that the EU-UK trade talks will be unique in that, unlike other talks which are about reconciling divergent economies, both entities start at the same regulatory point and the challenge is managing divergence.

Some are hinting, however, that they expect Mr Johnson, cushioned by a hefty majority, to begin to soften his opposition to regulatory alignment.