Fear and dismay as Erdogan cracks down on Kurdish opposition 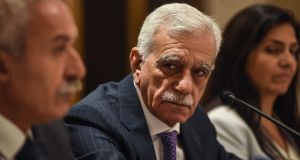 Turkey’s ancient city of Mardin was jubilant this spring when a Kurdish opposition politician once again won the race to become the province’s mayor. Supporters trilled and cheered as Ahmet Turk returned to office three years after being removed and replaced by a government appointee.

But eight months on, Turk and all five opposition mayors elected in subdistricts of Mardin have been removed from office after being accused of supporting terrorism.

Most of them are now in jail and a mixture of fear and dismay hangs over Mardin, a multi-ethnic province famed for the intricate carving that embellishes its limestone mansions, churches and mosques.

In one of the many gold shops in the historic town centre, a member of Mardin’s Syriac Christian community summed up the mood. “There’s no remaining space for talking about politics,” said the jeweller, who asked not to be named. “People are scared.”

The latest crackdown is part of a three-year war of attrition by President Recep Tayyip Erdogan against the left-wing Peoples’ Democratic party (HDP), the main rival of his ruling Justice and Development party (AKP) in Turkey’s Kurdish-majority southeast. And it has gathered further momentum since October, when Turkey launched a military operation against Kurdish militias in northeast Syria.

The government accuses the HDP of providing money and other support to the Kurdistan Workers’ party (PKK), an armed group that has been locked in a 35-year conflict with the Turkish state. But the party’s supporters see other motives at play. “It’s as if there is only one man in Turkey – and he only wants his people to run the country,” said a young mother waiting her turn in a hairdresser’s shop.

Erdogan’s crackdown is sometimes characterised by international observers as an assault on all of Turkey’s Kurds. The reality is more complex.

As he prepared to talk to the FT in his office, the chairman of the ruling party’s Mardin branch, Faruk Kilic, was engaged in a heated discussion with an official conducted in Kurdish. “I am Kurdish. I’m from a Kurdish family,” said Kilic, who has four pictures of Erdogan on the display cabinet behind his desk.

Like many in this region, he recounts stories about the discrimination and violence faced by Kurds in the past. But as he saw it, everything changed when Erdogan swept to power in 2002. “People started to live freely and in peace, like in cities in the west of Turkey,” he said.

Erdogan undoubtedly went further than his predecessors in trying to resolve his country’s Kurdish conflict. He implemented cultural reforms and secured a ceasefire with the PKK. His party reaped the rewards at the ballot box, drawing millions of votes from Kurds.

But the peace process was complicated by the conflict in Syria, as victories by Syrian Kurdish militias emboldened their counterparts in Turkey. Domestic politics further upset Erdogan’s calculations when, in 2015, electoral gains by the HDP deprived him of a parliamentary majority – and thwarted a plan to enhance his powers.

That setback was followed by a collapse in the Kurdish ceasefire, which triggered a fresh wave of violence. Erdogan began to court ultranationalist Turks to prop up his flagging vote share. He adopted harsh rhetoric and unleashed a campaign against the HDP.

In a wave of arrests that began in 2016, the party’s two leaders were detained, as were thousands of HDP activists, more than a dozen members of parliament and almost 100 of the party’s provincial and district mayors.

Murat Otun, a 29-year-old small business owner and HDP supporter, said the message from the authorities to the public was that they could vote – but only for the ruling party. “They’re saying: you can’t choose anyone else,” he said.

When local elections came around again in March, Erdogan’s party made some gains in Mardin. But the HDP won the main prize, with voters handing the metropolitan municipality back to Turk.

This time it took just 4½ months for Ankara to replace him with a government bureaucrat – a move that the veteran local politician described as “an affront to democracy”. In total, 24 of the 65 HDP mayors who were elected across Turkey in March have been removed.

The ruling party insists it had no choice but to replace the mayors as part of its effort to stamp out the PKK, which is classified as a terrorist organisation not only by Turkey but also by the US and EU. “It was a necessity,” Kilic said.

But while there are undeniable overlaps between the two groups’ supporters, HDP officials insist they are not an arm of the PKK but a political alternative to violence.

Eylem Aman, co-chair of the HDP in Mardin, said there was “not a single piece of evidence” to support the claim that the party diverted municipal resources to the PKK. Party officials say that of the 93 mayors who were arrested in the first wave of removals three years ago, only 15 have since been convicted of a criminal offence.

In the face of the crackdown some HDP supporters are questioning the point of the electoral process when their chosen candidates are repeatedly removed. But others insist they will continue to vote for their party again and again.

Even some of Erdogan’s supporters see the situation as absurd.

Dervis Aglamaz, a trilingual teacher who is half-Arab, half-Kurdish, views the Turkish president as a strong leader who stands up to “western colonialism”. But he could not condone the decision to strip the new mayor of his job. “It’s immoral,” he said. “He was elected by the people.” – Copyright The Financial Times Limited 2019