US House of Representatives judiciary committee chairman Jerry Nadler says Donald Trump has committed “high crimes and misdemeanours” as he unveils two articles of impeachment against the president. Video: Reuters 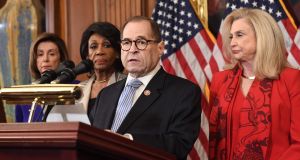 Democrats have unveiled articles of impeachment against Donald Trump, charging the US president with abuse of power and obstruction of Congress.

At a press conference in the US Capitol on Tuesday, House of Representatives judiciary committee chairman Jerry Nadler said Mr Trump had committed “high crimes and misdemeanours” as he unveiled two articles of impeachment against the president.

Outlining the charge of abuse of power, Mr Nadler said it was “an impeachable offence for the president to exercise the powers of his public office to obtain an improper personal benefit while ignoring or injuring the national interest. That is exactly what President Trump did when he solicited and pressured Ukraine to interfere in our election”.

Mr Trump is also being charged with obstruction of Congress for his “unprecedented categoric and indiscriminate defiance of the impeachment inquiry”, Mr Nadler said.

Tuesday’s development comes three months after House Democrats launched an impeachment inquiry into Mr Trump’s dealings with Ukraine, after the White House published details of a phone call between the president and his Ukrainian counterpart, Volodymyr Zelenskiy.

In the call on July 25th, Mr Trump asked Mr Zelenskiy for an investigation into former Democratic vice-president Joe Biden and his son Hunter, who sat on the board of a Ukrainian energy company. Joe Biden is seeking the Democatic nomination to run against Mr Trump in next year’s presidential election.

To Impeach a President who has proven through results, including producing perhaps the strongest economy in our country’s history, to have one of the most successful presidencies ever, and most importantly, who has done NOTHING wrong, is sheer Political Madness! #2020Election

The House judiciary committee will now begin debating the articles of impeachment and considering amendments in the coming days. It is expected that the committee, which has a majority of Democrats, will recommend to the House of Representatives that the articles be adopted. A full vote on whether to impeach Mr Trump is expected to take place in the 435-member House next week.

Tweeting ahead of the press conference on Tuesday from the White House, Mr Trump wrote: “To Impeach a President who has proven through results, including producing perhaps the strongest economy in our country’s history, to have one of the most successful presidencies ever, and most importantly, who has done NOTHING wrong, is sheer Political Madness!” He added the hashtag “#2020Election”.

House speaker Nancy Pelosi said the Democrats were seeking to “defend our democracy”. She described Mr Trump as a “continuing threat to our democracy and national security”.

Mr Trump is only the fourth president in US history to face impeachment. Andrew Johnson and Bill Clinton were impeached, but both were cleared in the subsequent Senate trial. Richard Nixon resigned before the House held an impeachment vote after he lost the support of his party on Capitol Hill.

While Mr Trump is likely to be impeached when the House takes a vote, he is unlikely to be convicted in the Senate, where Republicans are in the majority. A two-thirds majority is needed to remove a president from office.

Like Mr Trump, Bill Clinton was charged with two articles of impeachment, while three articles were drawn up against Richard Nixon.

Tuesday’s developments came a day after Democratic lawyers presented evidence to the House judiciary committee at a public hearing, essentially setting out the findings of the last few months of investigations.

“President Trump’s persistent and continuing effort to coerce a foreign country to help him cheat to win an election is a clear and present danger to our free and fair elections and to our national security,” said Daniel Goldman, counsel for the House intelligence committee, as he described a “scheme” by the president to encourage Ukraine to open politically-motivated investigations.

He said the evidence presented by witnesses in weeks of private and public hearings “cannot be seriously disputed – the president placed his personal interests above the nation’s interests in order to help his own re-election efforts”. But Republicans on the committee vigorously defended the president, an indication of the level of support he still maintains within his party.

Counsel representing Republican members of the committee accused Democrats of seeking to remove Mr Trump “because they disagree with his policies”. Stephen Castor, the minority counsel for the judiciary committee, said Democrats were “obsessed with impeaching President Trump by any means necessary”.

“The Democrats went searching for a set of facts on which to impeach the president – the emoluments clause, the president’s business and financial records, the Mueller report and allegations of obstruction there – before settling on Ukraine,” he said.