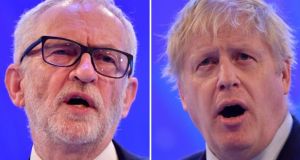 As election night wore on, the fates of politicians from across the political spectrum hung in the balance, with the casualties and survivors. Photograph: Ben Stansall/AFP/Getty Images

As election night wore on, the fates of politicians from across the political spectrum hung in the balance, with the casualties and survivors.

The leave-voting former mining constituency of Blyth Valley was one of the first seats to declare – and confirmed that Labour was on track for a terrible night. The Northumberland constituency has been in Labour’s hands continuously since 1950 and even at the last election the party had a 19 per cent majority. But an extraordinary surge in Tory support delivered the seat a Conservative MP in the form of Ian Levy who told the audience: “On Monday, I’m getting the train to London and we’re going to get Brexit done!”

The Labour party co-chair and former president of the National Union of Mineworkers has been an enthusiastic supporter of Jeremy Corbyn and played a key role in shaping the campaign, regularly appearing on the airwaves to push the party’s policies. But Ian Lavery only just held on to his Northumbrian seat after a recount and saw his majority cut from 10,435 to 814. The once-solid Labour constituency which did not register as a potential battleground in this general election will now be a key Tory target in the next contest.

The Cumbrian coastal constituency was flooded with journalists after the Tory thinktank Onward suggested that “Workington man” represented the older working-class male voters who the Conservatives would need to win over. Although mocked at the time, the prediction appears to have been vindicated. Sue Hayman, who had served in Corbyn’s shadow cabinet for the last two years and had been hoping to go into government as environment secretary. Instead, she has found herself out of a job after the Conservatives won the constituency for the first time at a general election, breaking more than a century of Labour dominance.

The Labour MP predicted he would lose his seat and said Labour facing a wipeout in the Potteries. He told the BBC he blamed the Labour’s vague Brexit policy for the defeat, saying that the leadership did not appreciate the damage caused in traditional Labour seats outside London by the party’s shift towards a remain position. He told the BBC: “Some of the siren voices in the shadow cabinet who have big Liberal Democrat votes in their London seats decided that stopping Brexit – and therefore lining themselves up for future leadership bids – was much more important than respecting the vote in marginal constituencies. They’ve sacrificed us for whatever political ambitions they want to do next.”

A rare Labour gain on an otherwise grim night for Corbyn’s party. Anderson took the inner London constituency from the Conservatives, after Justine Greening, a former Tory cabinet minister, decided to stand down from the constituency. Putney received extra attention when Momentum founder Jon Lansman, a key Corbyn ally, told ITV that the constituency showed how some parts of the country were attracted to the Labour manifesto: “It’s all very well saying the policies have been rejected – the voters in Putney aren’t horrified by the policies.”

The Northern Irish constituency had been represented by the independent unionist Sylvia Hermon since 2001, with the DUP pushing hard to take the seat. But in a sign of trouble for Arlene Foster’s party, they instead lost to the candidate from the cross-community Alliance party by 2,968 votes. The defeat suggests the DUP, who propped up the Conservatives in Westminster for two years, may be in trouble.

Forbes has became one of the shortest-serving MPs, having only been elected six months ago in a closely-fought byelection for the key swing seat. The loss of Peterborough, a bellwether seat which has swung between the Tories and Labour, was another indication that the party were suffering across the board. The new MP for the seat will be Conservative Paul Bristow.

The north Wales town of Wrexham has been a solid Labour seat for almost a century but once again the Conservatives managed to snatch a pro-Brexit constituency away from Corbyn’s party. In line with many of the new Conservative MPs she is a Brexit loyalist who has already pledged to back Johnson’s plans to lead Britain out of the EU. At the count Atherton declared: “Wrexham voted for change - now let’s get Brexit done.” –Guardian