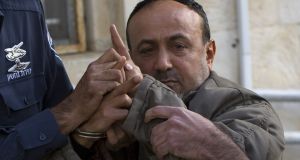 Israel has released a video that appears to show the high-profile leader of a Palestinian hunger strike eating in prison.

The prison service released the video of what it said was Marwan Barghouti eating cookies and a candy bar on two occasions in late April and early May.

Barghouti’s wife, Fadwa, claimed the video was “fabricated” and “intended to break the morale of prisoners”, after more than 1,000 Palestinians in Israeli jails joined Barghouti in refusing food from April 17th.

On Israel’s part, a minister appeared to suggest prison officials had been involved in introducing the food into the cell where Barghouti was being held in solitary confinement with the aim of tempting him to eat.

The release of the footage is the latest development in a fierce battle to control the narrative of the prisoners’ hunger strike, which its leaders insist is for improved conditions in Israeli prisons but which Israel says is for political reasons.

Barghouti (58), a leader of the second Palestinian uprising and senior member of the Palestinian president Mahmoud Abbas’s Fatah party, is serving five life terms after being convicted by an Israeli court of directing two shooting attacks and a bombing that killed five people. Barghouti disputed the court’s jurisdiction and did not mount a defence, and has been in prison since 2002.

Polls suggest Barghouti is the most popular choice among Palestinians to succeed 82-year-old Mr Abbas as Palestinian president.

In the video footage, Barghouti can be seen apparently unwrapping food – understood to be biscuits and a candy bar – in his prison cell and eating it in his toilet stall.

Speculation about attempts to induce strikers to eat was first raised by an TV interview with an unnamed prison official suggesting guards had hidden food in cells.

That appeared to be given credence by an interview given by Israel’s public security minister, Gilad Erdan, to army radio in which he appeared to confirm that the footage of Barghouti had been obtained as part of measures to undermine the hunger strike.

Erdan said: “I think it is pretty clear that [Barghouti] does not know [he is being filmed], and that if he does he probably doesn’t know that the prison service has the ability to obtain what was shown.”

He said he was unsure whether the release of the footage would help break the strike. “I think it still too early to determine. It is not clear if all or most of the prisoners are aware of it. They are cut off from the outside world, but I estimate that in the coming days it will be possible to see the impact of the publication.”

The protesting prisoners have issued a list of demands including better medical services, family visits and more dignified detention conditions.

Fadwa Barghouti said the video would not undermine the hunger strike. “These measures to break the morale of prisoners show Israel’s failure,” she said.

Israel holds about 6,500 Palestinians on charges related to the Israeli-Palestinian conflict. Israel says 890 prisoners are participating in the hunger strike.